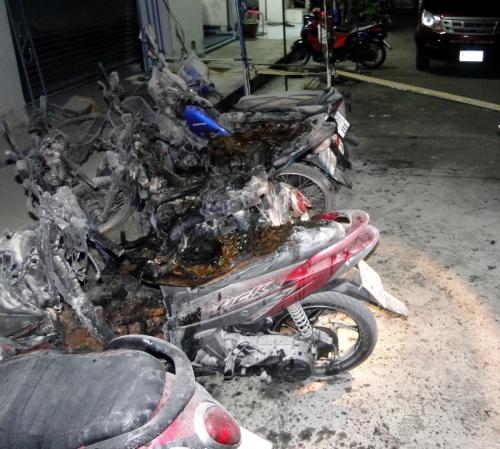 PHUKET: Eight more motorbikes have been torched in Phuket, this time in a housing estate off of Vichit Songkram Road, near Prince of Songkla University.

At 3:30 this morning, police were called to the C apartment block in the Moo Baan Irawadee Ketho Yee Teng housing estate, where they found eight burned motorbikes.

“I believe the fire started from a pink Yamaha Fino, which was the most burned,” Tung Thong police Capt Wittaya Sinjamroen said.

The owner of the pink Yamaha, Phanuthat Wattanakit, told the Phuket Gazette, “When the fire started I was playing a game in my room on the second floor. I heard my neighbors shouting that they smelled something burning.”

“I opened the window and saw the fire, so I came down to my bike to move it immediately,” he explained.

“Unfortunately, my bike was totally burned. I couldn’t save it, so I helped other people extinguish the fire,” he added.

Mr Phanuthat explained that he always parked the bike in the same area and had never had any problems before.

“I’ve never had any problem with anyone – except for an adultery problem about a year ago – but I don’t think that’s the motive for the fire,” he explained.

Capt Wittaya said that the Phuket Forensics Office would be called to investigate.

“Right now we can’t be sure if this was done by the same group of teenagers who have been burning bikes in other areas or not,” he said.

The Gazette has reported possible arson attacks on nine motorbikes this year.

The most recent attack left four bikes blazing in Patong on April 9 (story here). Witnesses said a gang of teenagers were responsible.

Teen masseuse falls from fourth floor after argument with boyfriend