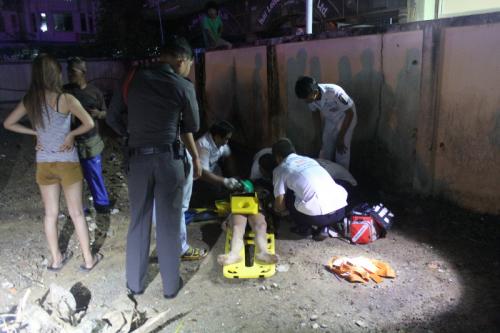 PHUKET: A 17-year-old masseuse is in a coma after falling from the fourth floor of a building following an argument with her boyfriend.

The young woman was discovered unconscious and severely injured on the ground behind the Phuket Town massage parlor where she worked, a Kusoldharm Foundation rescue worker told the Phuket Gazette.

A friend of the woman told the Gazette that the 17-year-old had argued with her boyfriend outside her room. The friend heard the boyfriend leave and heard the woman enter her own room alone.

“At about 4:50am we all heard a banging noise like something hard hitting the ground in the back of the building. We looked down from the window and saw her lying unconscious on the ground,” said the friend.

The police are continuing to investigate the case.