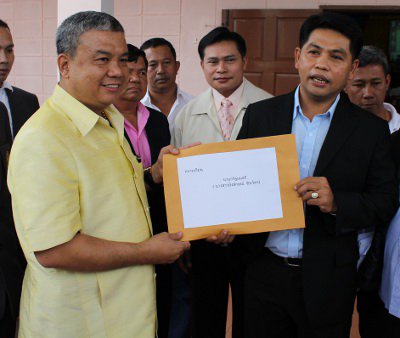 The club has asked PM Yingluck and DPM Chalerm to take action against the Thai expat, Thitinant Kaewchantranont.

Mrs Thitinant, 63, resides in New Zealand. However, she was in Bangkok last Friday, at which time she allegedly made improper gestures towards an image of HM King Bhumibol Adulyadej.

The image was displayed during a “multi-color” shirt rally the day the Constitution Court gave its verdict on the legalities of making changes to the charter.

Original reports of the incident alleged that Mrs Thitinant was mentally unstable. However, her ability to post pictures and other personal information on Facebook is being used to cast doubt on such claims.

In their letter, the Rak Phuket Club claimed that Mrs Thitinant violated Article 112 of the Constitution, which embodies the lese majeste law that makes intentional insult to the monarchy a punishable criminal offense.

Though the incident took place in Bangkok, the Rak Phuket Club said it was such a serious issue that it needed to be addressed immediately in order to uphold the dignity of Thailand as a constitutional monarchy with HM The King as head of state.

Police in Bangkok have reportedly lodged a lese majeste complaint against Mrs Thitinant.

It was also reported that she was unable to accompany her foreign husband on their return flight to Auckland as she is now undergoing treatment at the Galaya Rajanagarindra Institute in the capital.

Phuket Surfing: Stoked on a bit of star power