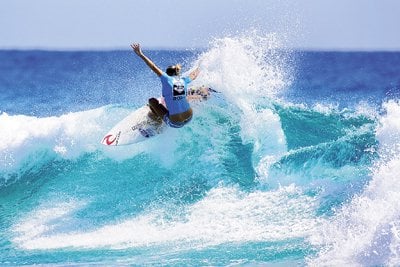 PHUKET: The monsoon season is back and you know what that means – the Quiksilver Thailand Surf Competition will soon return to Phuket. This year features an all new, star-studded lineup.

More than 300 surfers from all over the world are expected to participate in the event, which will be held from September 12-15 at Patong Beach.

The competition is organized by QS Retail (Thailand) Limited.

Commenting on the level of talent this year, local surf guru Mike Schnider, of long-standing Kata Beach surf-staple, Nautilus Dive & Surf said: “There are some people coming from other countries this year and competition could get a lot tougher than before.”

A few of the countries represented at the event will include Australia, the USA, Taiwan, South Korea, Japan, Indonesia, Malaysia, Hong Kong, the Philippines, the Maldives and of course, Thailand.

One favorite to stand atop the leaders board is Phuket’s own Anissa Flynn, 14, who currently leads the Asian Surfing Championship (ASC) women’s tour.

Flynn may face real competition this year in the form of five-time women’s ASP World Tour champion Stephanie “Happy” Gilmore, 23, who has announced her entry into the event.

“This is an Asian thing,” says Michael Flynn, Anissa’s father and manager, “So, if Stephanie Gilmore wins this competition and Anni comes in second that’ll still keep her atop the Asian tour in points.

“Just going into a final with Stephanie is a win,” he added.

After a recent meeting with Phuket Governor Tri Augkaradacha at Provincial Hall, Surached Mungthong, General Manager of QS Retail said, “This year is going to be very special. Stephanie Gilmore, the Australian pro-surfer will compete in the event and is also going to be in our fashion show.”

The Quiksilver tournament is the largest surf competition in Thailand – now in its fourth year.

The men’s division may be over before it gets started if some of last year’s Quiksilver-sponsored Balinese surfers return. Their presence meant locals in the men’s division had little chance.

The longboard and grommet divisions are where locals stand the most chance of victory. Khun “Golf”, a local sponsored by Tony of Nautilus Surf & Dive, nearly won the longboard division last year, coming in 2nd. He’ll be competing again this year.

As for the groms, Anissa Flynn looks hard to beat, but she may be challenged by some skillful boys, since that division is unisex.

Gilmore’s experience as a big wave rider will undoubtedly play to her advantage if waves end up in the 2-4 meter range – as they’ve been lately. Local surfers are hoping for smaller waves in order to hang on against foreign competitors who have more experience riding larger surf.

“You never know what will happen, being unlucky can happen to anyone,” says Schnider with a chuckle. “Last year there was a woman pro surfer sponsored by Ripcurl who was eliminated early on just because she didn’t get any good waves.”

There will also be performances by the Quiksilver Team Riders, a fashion show of Quiksilver & Roxy clothing, and a concert by an as yet unnamed “famous band”.

“We’ve arranged for outdoor extreme sports performances by BMX riders, sketch-board experts and ‘B-boys’, who will dance throughout the three-day event between competition heats,” adds Surached.

The competition is aimed at encouraging tourism in Phuket during the low season and publicizing the surf season, which runs from June through September.

There will also be another groms only tournament (young surfers), to be held at Kata beach around September 8-9, which is sponsored by Ripcurl.