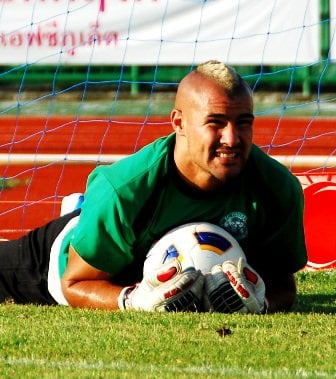 Though Da Silva was not available for questioning at the time of this report, a reliable source has confirmed to the Gazette that rumors about the transfer circulating on the team’s Facebook fan page on Thursday were true.

The source said that the lanky Brazilian will play his last match on Sunday, when the 15th placed Islanders are set to host 7th placed Songkhla FC at Phuket’s Surakul Stadium.

After the match, Alonso will move to Samut Songkhram FC, a team struggling to avoid relegation from the elite Sponsor Thai Premier League.

Also playing his last match for Phuket on Sunday will be former team captain, Suphat ‘James’ Anthong, who announced earlier this week his decision to transfer to Yamaha Division One league leaders, Ratchaburi Mitrphol FC.

With the losses will come gains, with Phuket poised to announce at least six new “high quality” players to join the club for the second half of the season.

The second half begins on July 25, when Phuket will play their away-leg league match against Songkhla.

Although the new players will not debut until then, a large turnout is expected at tomorrow’s match against Songkhla – including many local residents who hail from that province.

A large number fans, of both Songkhla and Phuket, look forward to the return of former Surakul crowd favorite Jonathan Matijas, the fiery French goalkeeper who played for Phuket during part of last year’s campaign.

Initially coming to Thailand during the mid-season break last year, Jonathan is now the star keeper for Songkhla.

Jonathan Matijas confirmed with enthusiasm that he will be playing Sunday.

“I can’t wait to come back to Surakul! I am missing all my old fans and other friends in Phuket! It will be a great joy for both the supporters and me… I will be so glad to be there… I am missing my Phuket fans,” he told the Gazette.

Asked how confident he is about his new team prevailing on Sunday, Jon said: “The Thai league is full of surprises – every team is able to win or lose against every other team. Phuket is strong and even more so at Surakul, of that I am sure.”

“But my team is good too, even though at this time we have some players leaving and others who have some problems in the group. It’s not a perfect time for my team, but we are still a dangerous team anyway because all of our players are good.”

“The only thing I know and I am sure about is that it will be my pleasure to be back in Phuket… I miss playing in Surakul stadium so much!”

Though underdogs, Phuket are expected to put Jonathan to the test this Sunday.

“We are going through some tough changes now, but we are all really determined to come back this season, and our new coach is very good,” he said.

Phuket’s new head coach Narong Ajarayut, a local businessman, is a former defender and coach of the Thai National team.

Thai boats to the fore on Day 2 of Phuket Raceweek