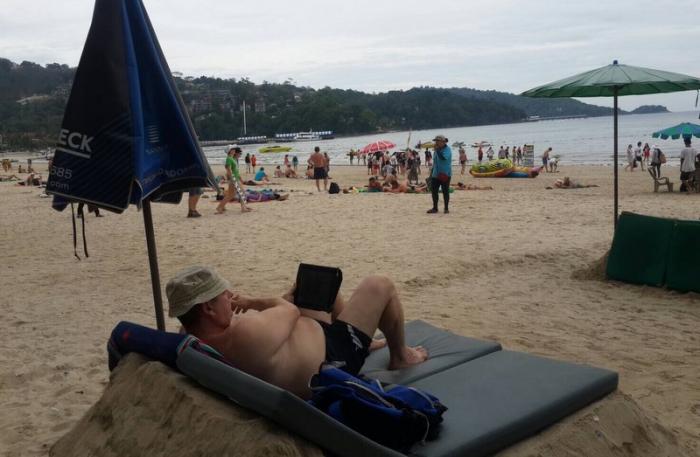 PHUKET: Patong Mayor Chalermluck Kebsup confirmed today that beach mats laid out on raised beds of sand at Patong Beach are within the 10 per cent zone and are in line with the government’s beach management rules, after pictures of the set-up went viral on social media.

The pictures, which were shared and commented on by thousands of people, were first posted on a Thai Facebook page with the hashtag ‘when you are not allowed to have beach chair’.

“Some vendors have built makeshift sand beds, each about two feet high, and placed mats on top of them to service tourists. People believed that these were illegal so they started sharing their pictures,” said Mayor Chalermluck.

“However, the vendors are not breaking any beach management rules. The beds are not that high and do not interfere with the scenery much – they are useful for tourists and especially handy for old people. In fact, if the mats are laid flat on the beach, sand might blow into tourists’ eyes,” she added.

However, Mayor Chalermluck said she would not ignore this issue and keep a close eye on vendors’ activities.

“The only issue is that the raised sand spoils the beauty of the beach when the mats and umbrellas are taken down at night. It is not a very pleasant sight,” said Ms Chalermluck.

“We have informed provincial authorities of the matter, but are still waiting for a response from them. Since the issue has now garnered public attention, I think the provincial office will call for a meeting soon. One possibility is asking the vendors to take down the sand beds at night. We’re still waiting for an official meeting to discuss the exact requirements,” she added.

Patong Beach was the first beach in Phuket to have the official 10 per cent zone implemented, on November 6 last year, stipulating that sun lounge vendors could only place their beach beds in a designated area (story here).

Poultry pilferer turns out to be six-meter python