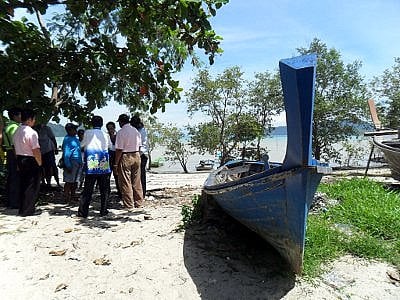 PHUKET: Local fishermen at Palai Beach, on Phuket’s east coast, today won the right to use a section of the beach for landing and repairing their longtail boats.

Led by Jirapat Phum, about 20 local fisherman arrived at the beach this afternoon to meet Phuket Marine Office Chief Phuripat Theerakulpisut and officers from other relevant organizations in order to inspect the site.

“A lawyer representing a businessman told us to get off the land, a stretch of 300 meters along Palai Beach where we fix our boats,” Mr Jirapat explained.

The section of beach used by the fisherman, who together represent a fleet of about 100 boats, was intentionally left unobstructed by the Chalong Tambon Administration Organization (OrBorTor) when it built a sea wall along the Palai waterfront, he added.

“The lawyer and some men told us that we and other local villagers would be forcibly removed as the businessman had a title deed for the land, but the land in question is a mangrove forest – it belongs to the public,” he said.

After the inspection visit today, the land was declared a mangrove forest and the fishermen were given official permission to use the beach for their boats.

“The land was today proved to be a mangrove forest and it is under the responsibility of the Phuket Marine Office,” a happy Mr Jirapat said.

Chalong OrBorTor Vice President Opas Chobdee and Mr Phuripat said they would both issue a formal letter confirming the fishermen’s right to use the beach.

However, both were clear in stipulating that the fishermen were not to encroach onto any private land in the area or build any structures on the beach.

The villagers, happy with the outcome, agreed to abide by the conditions and announced that they would not stage a protest, as they had originally intended to do.

Raided, a Phuket drugstore coughs up colorful comments from officialdom