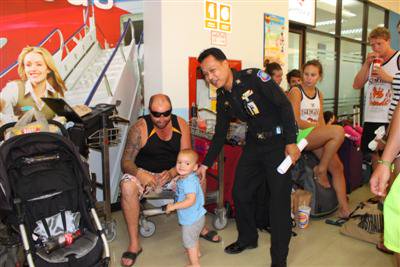 Qantas this morning announced the airline was drawing up a plan to assist Australian tourists left stranded. At about midday today Qantas posted the following message on its website:

The following arrangements are available to Air Australia customers holding a valid ticket issued on/before 17 February 2012 who are affected by the grounding of Air Australia.

Customers will need to make their own arrangements between Curtin (Derby) and Broome, between Denpasar and Jakarta, and between Phuket and Bangkok to travel on the Qantas flights offered.

“Passengers who have already commenced their journey with Air Australia will be able to purchase a Jetstar ticket for the same price as their Air Australia fare until 29 February, 2012, regardless of the return date,” said a notice posted on the Jetstar website earlier today.

Air Australia passengers need to show their Air Australia itinerary for travel at a Jetstar Service Desk at their point of departure airport. Where possible and subject to availability, Jetstar will seek to accommodate affected passengers on the next available flight to their destination.

Air Australia passengers who have yet to commence their journey can access special fares by phoning the Jetstar call center on 131 538 or +61 3 9347 0091. International call center numbers are available at www.jetstar.com