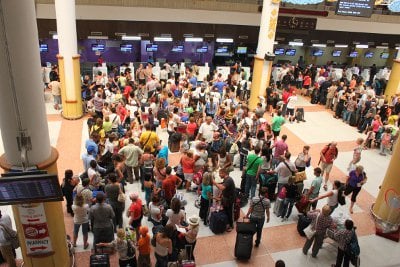 PHUKET: Scores of Australian tourists have been left stranded at Phuket International Airport after low-budget carrier Air Australia grounded all flights yesterday due to insolvency.

The state-run Australian Broadcasting Commission news quoted a source as saying that Air Australia was even unable to buy fuel at Phuket Airport last night for a flight ready to take tourists home.

The directors of the company met late into the night and appointed insolvency specialist firm KordaMentha as interim administrators.

The move left about 4,000 passengers stranded or having purchased tickets they will not be able to use, many of them in Phuket.

Phuket Airport Director Prathuang Sornkham this morning told the Phuket Gazette, “I was informed around midnight that about 260 Australians were stranded as their flight to Australia would not be not departing.

“Their fight was supposed to depart at about 7:30pm, but they had some problem with their business and they stopped all flights,” he said.

“Some of passengers have gone on other airlines and some went back to stay in Phuket Town.” he added.

Dealing with the chaos at Phuket Airport this morning, Australian Honorary Consul for Phuket Larry Cunningham said he was still trying to come up with an exact figure of how many people have been left stranded in Phuket..

“We’re still trying to find out. There was a flight last night to Melbourne that didn’t get out. We don’t know how many of those people eventually got out, and how many are still here. I am still waiting on manifest lists. But a lot of them are still here, because they’ve already been up to see me.

“There is a flight [scheduled] tonight to Perth, which obviously isn’t going to go. And there’s another flight [scheduled] on Sunday. At this stage there are meetings going on in Australia, I understand, for potential other airlines to cover the people left here,” he said.

“We had a similar problem with them about a year ago when their plane broke down,” he said.

Asked if the long wait and uncertainty was taking its toll on travelers’ patience, he said, “Aussies are fairly laid back as a rule. ‘Things happen, she’ll be right mate.’ That’s the sort of approach we’re seeing here.

“But if people are stranded here for more than a few days it’s hard to know what the mood will be like. But generally, all the people I have spoken to today understand that these things happen and they are remaining fairly positive. I think that news reports that other airlines will step in to help has probably comforted them as well,” he said.

One such carrier is Qantas, which recently posted the following message on its website:

“Following the grounding of Air Australia, Qantas is developing a plan to assist stranded customers. Details will be announced shortly.

“If you are holding a ticket for travel on Air Australia today, please proceed to the Qantas Sales Desk at the airport for assistance.”