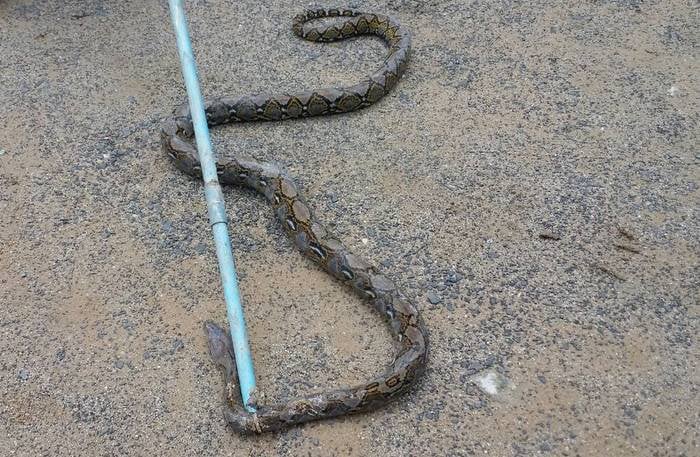 PHUKET: A large python was discovered seeking highland near a Phuket shrine permeated with local lore.

The shrine was built in honor of the legend of Toh Sae, who arrived on the almost entirely uninhabited Phuket island in ancient times, or so the story goes.

Toh Sae had sailed from Malaysia and Indonesia with his two brothers, Toh Ya and Toh Phra Thaeo, all of who are considered gods to believers.

When they landed, the three men split ways. Toh Ya went to the the west coast near Surin and Kamala; Toh Phra Thaeo went to Thalang, where there is now a shrine erected in his name; and Toh Sae, went to Mueang – his first stop being Khao Toh Sae, commonly known as Monkey Hill.

Some locals believe that shortly after arriving, Toh Sae performed a miracle to help a marooned fisherman survive. It is this alleged miracle that continues to drive some people to make offerings at the shrine that the snake was found near.

The python was released at Bang Wad Dam in Kathu.

A bigger reptilian surprise arrived in a Phuket bathroom on August 3, when rescue workers were forced to wrangle with a 20 kilogram monitor lizard (Video Report here).

“There are many reports of dangerous animals everyday. Therefore, if you find one in your home, please do not hesitate to call us 24 hours a day at 076-246 301,” Mr Kasun said.