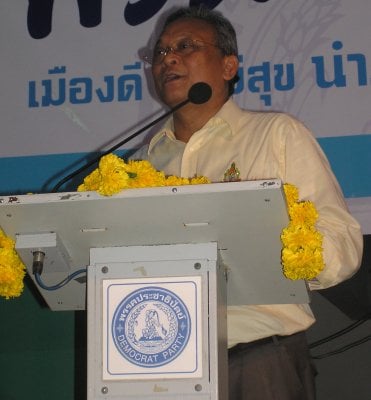 PHUKET CITY: Tomorrow’s District 1 Phuket Provincial Council by-election has been complicated by a complaint filed against one of the candidates, Somkuan Tansakul, to the Phuket Election Commission (PEC) by another candidate, Wongwara Sa-nguansak.

K. Wongwara has alleged that K. Somkuan’s use of photos of Phuket Provincial Administration Organization (OrBorJor) President Anchalee Vanich-Thepabutra in his campaign material and her open support for him gives him an illegal advantage and is in violation of election guidelines laid down in the Constitution.

“We will let the August 5 by-election go ahead as planned as currently there is no functional CEC in office. The PEC does not have the authority to rule on the complaint. This means that whoever wins in tomorrow’s by-election will have to wait for CEC approval before they can take office. I do not know how long this will take,” he explained.

K. Somkuan also has the backing of the Democrat Party, and yesterday party Secretary Suthep Tueksuban came to Phuket and gave a speech on K. Somkuan’s campaign stage.

In his speech, K. Suthep insisted that the Democrats would not be dissolved and would be able to carry on the fight against the “Thaksin regime”.

Democrat Party Deputy Secretary Akom Eng-chuan and OrBorJor President Anchalee, along with around 200 supporters, also attended the meeting at Samkong Chinese Shrine, which was arranged to garner support for K. Somkuan in tomorrow’s by-election.