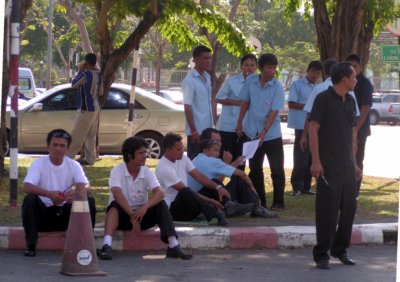 PHUKET TOWN: Some 100 members of the Phuket Airport Limousine and Business Cooperative Ltd (PBC) assembled at Phuket Provincial Hall this morning to protest a new concession that gives a rival group of taxis the right to operate 30 new vehicles at Phuket International Airport.

Airports of Thailand (AoT) yesterday approved a request by Phuket Mai Khao Sakoo to operate 30 more limousines at the airport. This infuriated staff of the PBC, which for years enjoyed a virtual monopoly concession and was the only taxi service allowed to operate a kiosk inside the arrivals terminal.

Two years ago the PBC staged a five-hour protest when the Phuket Mai Khao Sakoo service was launched, for the first time giving the PBC direct competition inside the arrival terminal.

There are also about 65 metered taxis operating at the airport, but their counter is outside the main terminal building.

There was also a recent crackdown at the airport on unregistered ‘black plate’ taxis that pick up and drop off passengers without paying fees to AoT.

The scene at Provincial Hall was relatively subdued earlier this morning as drivers awaited the arrival of Phuket Governor Wichai Phraisa-ngop, who is flying in to Phuket today and is scheduled to meet tour guides and tour company operators to discuss tourist safety.

However, there have been unconfirmed rumors that the PBC is considering a blockade of Phuket International Airport if their demands for a more equitable distribution of the new vehicle allotment goes unheeded.

In the latest development, after his arrival Gov Wichai explained to the PBC protesters that he did not attend yesterday’s meeting on the new quotas, which cannot go into effect until he signs off on them.

A meeting will be held in a week’s time to discuss the new quota and to find a solution acceptable to the PBC, he said.