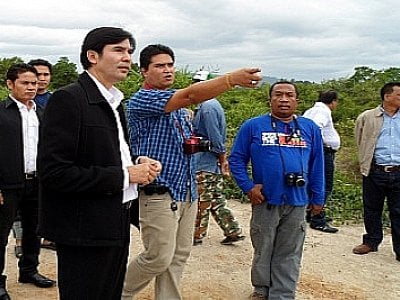 PHUKET: Pheu Thai Party spokesman and party list MP Prompong Nopparit, who is also the vice president of the parliamentary anti-corruption committee, returned to Phuket on Saturday to inspect alleged encroachment on a protected mangrove forest in Rassada.

At the meeting, Mr Prompong vowed to bring to Prime Minister Yingluck Shinawatra’s attention serious cases of encroachment on government land, notably cases that officials have failed to act on.

At the mangrove forest site in Rassada on Saturday, Mr Prompong was shown a large sign posted at the site highlighting the areas claimed to be owned by a person who was identified only as a “local politician”.

To indicate the lack of action by officials over the years, underneath the the map on the sign are the words “5 Governments, 4 Governors, 3 District Chiefs, 1 Land Office Chief”.

“The local villagers reported this case to the Administrative Court in Nakhon Sri Thammarat, but there has still been no action. I believe this case involves many departments and the investigation process will take a long time, but it is a good thing that local villagers are working together in order to claim public land back,” said Mr Prompong.

Anucha Ardhan, vice president of the Baan Kuku Mangrove Forest Conservation Group, has long asserted that the land in question was declared protected national forest in 1978. But in 2007 “some people” arrived and fenced off more than 50 rai, posting signs saying: “Private Property. Do not enter.”

The claim was made using a title deed naming a”local politician” as the owner of the land since 1978, he said.

Frustrated by years of fighting for officials to reclaim the land, the villagers petitioned Her Majesty Queen Sirikit, who bestowed protection for much of the forest by deeming it protected under Royal Patronage.

However, today more than 29 rai of the forest remains fenced off as if it were private property, which Mr Anucha says has been cleared in the center, away from view from the fence.

“I have learnt from the local villagers that the land in this area cannot be legally owned by anyone. The Land Office cannot issue a deed to anyone for land in national protected forest. Which means the document that the ‘local politician’ has was illegally issued,” said Mr Prompong.

“I will address the issue at the Pheu Thai Party meeting and we will try to find the best solution to this problem. The illegal actions have to stop and I will not let those who break the law get away without any penalty,” he added.

In 2008, the Phuket Governor at the time, Niran Kalayanamit, blasted officials for the lack of action in protecting government land from encroachment.

In particular, Mr Niran named the same site Mr Prompong visited on Saturday – along the banks of the Bang Chee Lao Canal and the Tha Jeen Canal – as one the his prime examples of poor enforcement of the law to protect the environment.