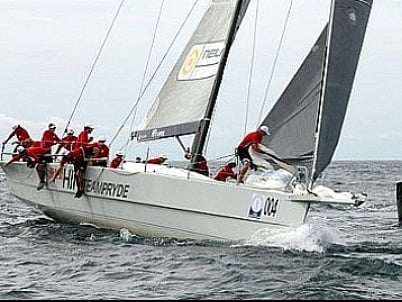 PHUKET: Hannes Weimer’s Team Premier surged to the top of the IRC Zero standings to lead the class with five points after the second day of yacht racing today in the 25th Phuket King’s Cup Regatta.

Frank Pong’s Jelik II fought back from two fourth-place finishes yesterday to win today’s Race Three in good winds at the start line, easing off towards the end of the Round-The-Island course.

Rounding out the big guns in the top-flight IRC Zero class are Hong Kong’s Sam Chan and Neil Pryde, both on eight points in the series.

Allen has won his class in the King’s Cup Regatta every year since his debut in 2008, but so far this year has already amassed 22 points, leaving the Australian in eighth place overall in the class on the 13-team table.

Singapore’s Steve Manning steered his Sydney GTS 43 to victory in Race Three and is currently ranked fourth in the series.

Despite trailing the leader by four points, Wiwat believes he is still in contention for the title. The Royal Thai Navy has landed five IRC 2 titles since the class was introduced in 2003.

“We led through the middle of the race, only to fade when the wind dropped,” Wiwat said.

“It was not too bad a performance, and there is a long way to go yet. We are confident we have an opportunity to move up the rankings when the shorter courses are used.”

The Phuket Gazette and The Nation are proud sponsors of the Phuket King’s Cup Regatta.