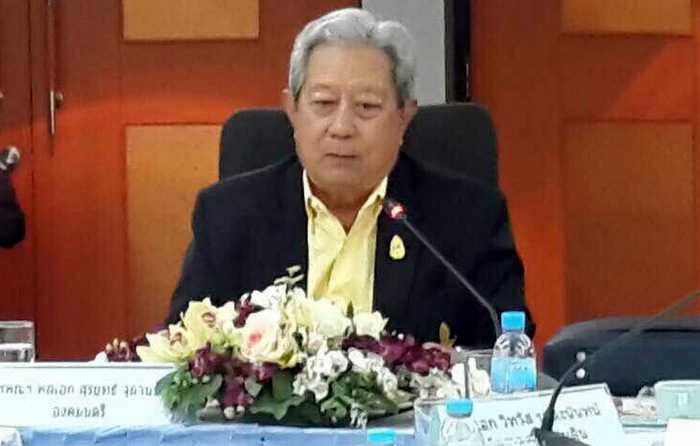 PHUKET: Gen Surayud Chulanont, Privy Councilor to HM King Bhumibol Adulyadej and former prime minister, has suggested that local authorities take further steps to improve the quality of life of the Phuket sea gypsies living in the north of the island.

Gen Surayud chaired a meeting in Thalang last Thursday to hear the current state of the living conditions of the sea gypsies in the Laem Lah and Hin Luk Diao communities in Mai Khao.

The visit followed up on an initiative to improve sea gypsies’ living standards launched by the Culture Ministry in 2009 (story here), which was formalized into an official government campaign last year (story here).

“The two communities used to be a single community living in Phang Nga. But then they migrated to the Pak Phra channel [separating Phuket from the mainland], where they divided into two communities,” Governor Nisit explained.

The sea gypsies in the two villages have been granted Thai citizenship and have 72 children attending primary school, as well as 27 attending high school.

“All the kids must attend school, but most of the adults are formally uneducated. However, in addition to speaking their native language, they are all able to speak Thai and the Southern Thai dialect,” Gov Nisit said.

Most of the villagers are fishermen or have jobs outside the village, while many of the housewives work as shellfish openers. The most common health issues affecting the communities were related to obesity, dermatitis, hypertension, asthma, heart disease, paresis and occasional dengue fever.

“The villagers spend most of their income on consumer goods and sending their children to school,” Gov Nisit said.

“There are some financial aids available to them, such as the Baan Laem Lah and the Hin Luk Diao community saving funds. Some villagers have taken out loans from the Women’s Professional Improvement Fund. However, most of them do not wish to be in debt.”

Both communities are in the process of requesting that the villagers be granted rights to live on the land where they now reside, Governor Nisit added.

The government was working on several projects to improve the sea gypsies’ standard of living and to offer them more life opportunities, he added.

“We are working on improving the quality of their homes so that they are safe and hygienic, and we have launched programs to help them become self-sufficient,” Gov Nisit said.

Other government initiatives presently underway include the establishment of an education fund and a bachelor-degree scholarship, as well as assistance in professionally managing and promoting their skills as fishermen to achieve higher standards of living.

“We are also encouraging the villagers to embrace and practice their traditional culture as a way of attracting tourists,” Gov Nisit said.

Gen Surayud offered two suggestions: “First, we should promote vocational study among the youths so that they can learn a trade and later earn a living.

“Second, when we are considering changes to their homes to make them safer and cleaner, we have to be careful to preserve their traditional culture in order to encourage them to be proud of themselves.”

The gradual erosion of traditional sea gypsy culture along the Andaman coast has come under increasing international attention. The increased awareness was part of what led to the impressive documentary “Vanishing World of the Sea Gypsies” (click here).

Earlier this year, the Department of Special Investigation revealed evidence to support land right’s claims by residents in the Rawai sea gypsy village who were fighting off court-ordered evictions to hand over their land to local investors (story here).

The same sea gypsy village in Rawai is also struggling to protect their youngsters from the deadly downward spiral of drugs and prostitution after revelations that girls, one as young as 10, were allegedly prostituting themselves to pay for drugs (story here).