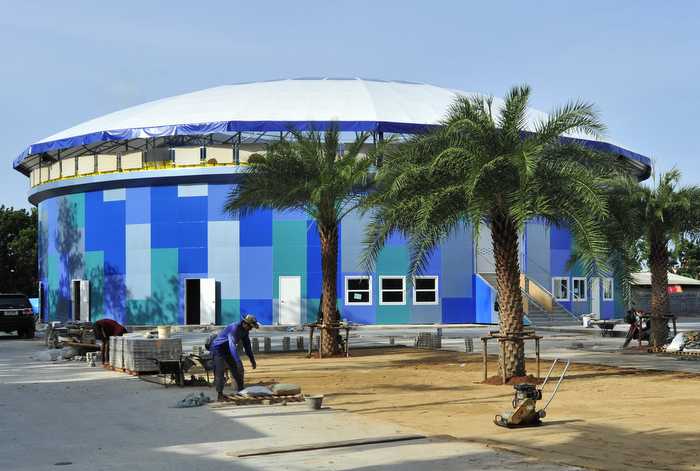 PHUKET: The hotly contested Phuket dolphinarium has yet to meet the necessary standards prescribed by the Department of Fisheries, the Phuket Gazette has confirmed.

“There are several things that Phuket Aqua Project Co Ltd needs to change at the Nemo Dolphinarium in order to meet our standards,” said Kiattikhun Charoensawan, chief of the Phuket Fisheries Office.

Fisheries officials from Bangkok visited the facility in Chalong on November 5 to ensure that it complied with Thailand’s regulations for an aquarium facility (story here) – it did not.

“We were told that we needed to make a lot of changes,” said the Nemo Dolphinarium project manager, who declined to be named.

Among the multitude of required adjustments was the need for changes to where and how the dolphins are kept before and after the shows, the oxygenating system for the pool, the ventilation system and the emergency exits for patrons.

“I believe it will be months before we have our operation license, as once the necessary changes are made, officials will have to inspect the site again. However, there is no guarantee we will be given permission to open,” said the project manager.

Nonetheless, the manager confirmed that the company was eager to open as soon as possible, but would ensure that the facility was fully legal before doing so.

“We are following all the rules strictly so that we are fully legal, and that all the animals, as well as the audience, are happy here,” he said.

If the facility is approved, a great amount of tension is expected to surround its opening, as locals continue to push to keep the island free of captive dolphins.

The facility was one of the hot topics during the American Chamber of Commerce (AMCHAM) in Thailand’s special forum focusing on the future of Phuket’s marine tourism industry last month (story here).

It also saw staggering results in a Phuket Gazette online poll, where an overwhelming majority of the more than 7,000 readers who took part voted against opening the dolphin park (story here).

The poll revealed that 98% of those who identified themselves as “tourists / visitors to Phuket” voted: “No – Phuket should not have a dolphinarium; they are cruel and it has long been known that captivity kills dolphins.”

The major controversy surrounding the facility stems from the fact that a number of the dolphins imported through Ukraine were caught in the wild at Taiji Cove, Japan.

A direct connection between five wild captive dolphins bound for the dolphinarium and the annual slaughter of thousands of dolphins at the cove was affirmed by Gary Stokes, Asia Director of the Sea Shepherd Conservation Society (story here).

Renowned dolphin-rights activist Ric O’Barry has led the charge against the facility, bringing the ethics behind the debate to the international stage.

“If Phuket actually imports dolphins from Taiji, it’s going to be a blemish on tourism in Phuket on an international scale, because Phuket will be supporting this dolphin slaughter,” Mr O’Barry told the Gazette in an exclusive interview earlier this year (story here).

“It perpetuates the suffering. It’s all about supply and demand, so it’s important for Phuket to say, ‘No. We want cruelty-free entertainment and tourist attractions in Phuket’.”

Teen mum yet to be charged for attempted infanticide