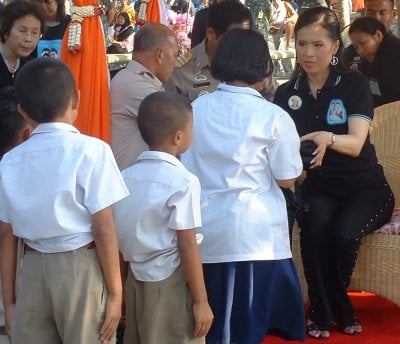 The Princess, dressed in black, arrived at the beach-side park at 5 pm, accompanied by Public Health Minister Sudarat Keyuraphan. There to greet them was Phuket Governor Udomsak Usawarangkura, Patong Mayor Pian Keesin and other officials.

Gov Udomsak spoke briefly on the damage caused to the province by the tsunami, saying that in addition to more than 260 deaths, 283 homes were completely destroyed and another 742 damaged, along with four schools. He estimated the cost of putting right the damage at more than 417 million baht.

Her Royal Highness distributed 200 gift bags to students and presided over the opening of “The Greatest Love of All” exhibition, a memorial to her son Bhumi Jensen, who died in the tsunami while on vacation with his mother in Khao Lak.

This exhibition featured a collection of photos of the life of K. Bhumi and the sale of memorial T-shirts and other products from the Princess’s “To Be Number One” campaign, which aims to keep children off illicit drugs.

Proceeds will be used to support a foundation dedicated to long-term support for young tsunami survivors.

The Princess told the audience that, despite the heartache of losing her beloved son, she still intended to work hard carrying out her duties and working for the benefit of the Thai people.

She said that her visit was intended to inspire survivors to persevere with their lives in the face of hardship and to encourage them to join hands in making the region an even better place than it was before the disaster.