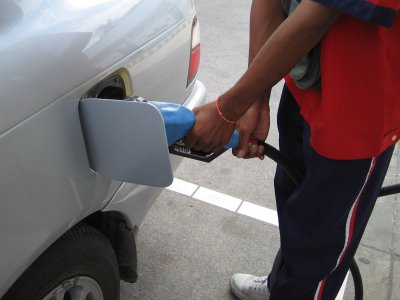 PHUKET: Businesspeople foresee price rises across the board due to the recent 4% rise in the price of diesel fuel, though they believe it will take some time before the impact is felt in the retail sector.

The 60-satang-per-liter price hike, announced last Tuesday, reflects the Energy Ministry’s inability to continue subsidizing diesel at a rate of 3 baht per liter.

The Ministry, which has already subsidized diesel to the tune of 68.8 billion baht since the beginning, now views the program as unsustainable in the face of rising diesel prices internationally.

Energy Minister Prommin Lerdsuridej said the government would not raise prices again this month because it wants time to assess the effect of the first hike on the economy.

Phuket Chamber of Commerce President Eam Thavornwongwongse told the Gazette that the increase, while necessary, would surely ripple through the entire economy.

He said prices at retail shops, especially in tsunami-affected provinces, would be closely monitored [by the Commerce Ministry] to ensure that any increases reflect real market pressures.

The Commerce Ministry recently issued an urgent request to more than 400 retailers asking them to freeze consumer-goods prices until the end of next month.

“If producers can continue to supply goods at current prices, retailers won’t have to pass on increases to consumers. No retailer wants to be seen as the first one to increase prices, as that would hurt customer loyalty,” he said, adding that any customers with evidence of price gouging could call his office (Tel: 076-213482; 076-212017) to make a complaint.

The Phuket branch of Big C was reported in the state-run media as having already announced a three-month price freeze, although the Gazette has been unable to confirm independently whether this is true or whether any other large retailers intend to follow suit.

Although the transport sector is already faced with increased costs, K. Tada said the Transport Business Association of Thailand has yet to agree to any rate increases among its members. He said that such increases were inevitable, however, due to the global trend of rising oil prices.

Still reeling from the affects of the tsunami, the local fishing industry is particularly alarmed by the increase.

Phuket Fishermen’s Association President Somyod Wongboonyakul told the Gazette that increased diesel prices would have a greater affect on small-scale coastal fishermen than on the owners of larger deep-ocean vessels.

Larger boats could still buy diesel sold tax-free by vessels operating offshore. The price under the government’s “green oil” program, which was set up to eliminate oil smuggling, will remain lower than those for diesel purchased on land, though they will also rise in line with actual costs.

Pointing out that fuel constitutes 60% of the operating costs of fishing vessels, K. Somyod said that when the green fuel price increases, many fishermen may find it no longer economically viable to go out to sea.

“There are at least 40 big fishing vessels in Phuket, about 10% of which are already staying in port as a result of the price hike. It’s possible that we will all stop working if it keeps going up,” he said.

He added that the National Fisheries Association of Thailand (NFA) would propose implementation of a new subsidy program to the government which ethe NFA is calling the “purple fuel” initiative. This would allow fishermen to buy fuel at reduced cost by using vouchers issued by the Fisheries Department.

Tour operators also expect to feel the pinch from the diesel fuel price hike in the short term. Wichai Ruangjaruwattana, Vice President of Phuket Tour Operators and Transportation Association, told the Gazette he expected it take about two weeks for the increase to affect their businesses. Fuel accounts for about 30% of operating costs, he said.

He added that he expected operators to try to reduce costs in other areas, such as payroll, in order to remain competitive and to continue helping to attract tourists back to Phuket.