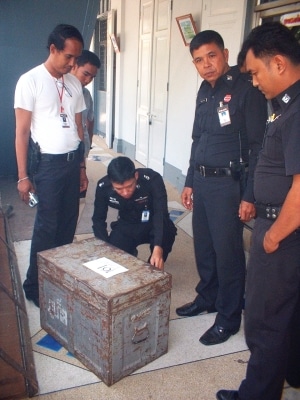 PHUKET: Phuket City Police say they have promising leads relating to the apparent theft of more than 2 million baht in government tsunami relief funds, and expect to make an arrest soon.

The funds were reported missing on February 15 by Metha Mekarat, Head of the Phuket Office of Disaster Prevention and Mitigation (ODPM), who said 2.05 million baht had gone missing from a metal box in a restricted room in Phuket Provincial Hall.

They dusted for fingerprints, checked for signs of forced entry and collected other physical evidence, both from the box and the strongroom where it was kept.

The forensics team removed the box from the room and noted that one of its two hasps had been cut and the lock was missing. The other hasp and lock were still intact.

Metal filings from the hasp and a large metal hook were collected as evidence by the investigators, who noted that there were no signs of forced entry into the strongroom.

The thief apparently used the hook to pry back the cover of the box once the hasp had been cut, reached in and made off with with 2.05 million of the 2.4 million baht the strongbox contained.

Col Paween also told the Gazette that investigators had questioned Wantana Meesang, the provincial government employee in charge of the room’s security, and several of her subordinates.

He added that the investigation was continuing. No arrest warrants had yet been issued, he said, because police want to ensure their case is airtight before proceeding.

“I will catch this robber and return the money to the strongbox. This case will be closed in the near future,” Col Paween said, adding that it was too early to reveal whether suspects included state employees.