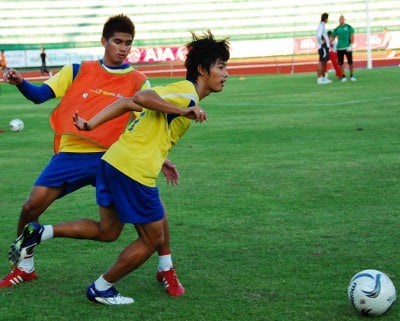 Having already clinched promotion to the elite Thai Premier League, the Buriram “Volcanoes” (27-7-1) look to maintain their undefeated-at-home slate, while Phuket (11-10-7) will strive to be the first team to snatch a road win against them all season.

The team’s French keeper Jonathan “John” Matijas told the Phuket Gazette that the team is ready for the challenge and expects to play well.

He ruled out media speculation that the players’ having received their November salaries a few days late had anything to do with last weekend’s 2-0 home loss to Chanthaburi FC.

“It was just a small problem getting paid a few days late. In fact it has been happening for about five months and many teams in the league have been having the same problem,” he said.

He blamed the loss on a lack of focus on the part of some of the players after a five or six game undefeated streak.

“It happens in football. Some players start thinking ahead to next season and things like that,” he said.

Before the team’s departure yesterday evening, Assistant Coach Apichart “Mo” Mosika spoke with the Gazette about the squad’s readiness for the upcoming match.

Coach Mo confirmed that Ivorian midfielder Abdoul Coulibaly would not available for the match due to a penalty ban. However, Watcharapong “Pae” Jun-ngam, one of the team’s top scorers, will rejoin after missing last week’s home loss against Chanthaburi.

“Though Abdoul is out of the upcoming match, he will be available to play in the match with last place Thai Honda on December 16,” Mo noted.

In addition to Pae, the coach has also designated Tameezee “Z” Hayeeyusoh as starting striker.

For the midfield ranks, he will start Sarach “Tang” Yooyen, and Seksit “Half” Srisai in the center, with Poramat “Mut” Krongborisut on the right wing and Niran “Noom” Panthong on the left wing.

The back line will include Ivorian Nenebi and Wiratrot “Too” Chanteng as center backs and Nitipong “Bas” Limsuwan as left back.

He has yet to make decision who will play right back, however.

“Last week, Ronnachai ‘Art’ Jinnakate played right back and he didn’t do so well, so I’ll decide at the last minute who will take this position,” he said.

AC Mo also confirmed that Jonathan will remain as goalkeeper.

Though hesitant to guarantee a win, he expects to bag at least one point.

“We have to try for three points, but if we cannot make it I believe we can get one point from a draw,” he said.

Speaking on the phone from the team bus yesterday, a travel-weary Johnathan told the Gazette yesterday he remains confident for the match.

Asked if he was worried about Buriram’s top imported strikers Douglas Gardozo of Brazil (14 goals) and Ivorian Kone Seydou (10 goals), Johnathan replied firmly, “No way! As the top team, of course they will have good strikers, but I can never be afraid of any player. I can respect that they are good, but I must stay confident and focused to do my best,” he said.

In their last meet in May, Buriram crushed Phuket at Surakul Stadium, 3-0. Johnathan joined Phuket in July.

Sunday’s rematch will be played at the new 24,000-seat I-Mobile Stadium in Buri Ram City. Kickoff is set for 6pm.

FC Phuket’s schedule after that is as follows: