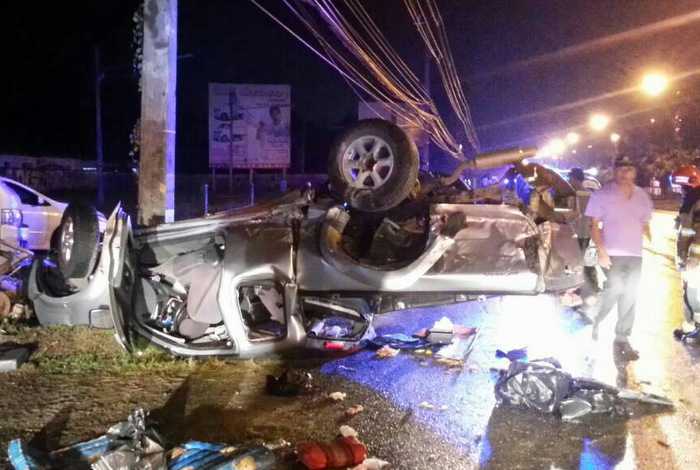 PHUKET: A five-month pregnant woman and five other people are in hospital after the pick-up truck they were travelling in crashed into a power pole on Thepkrasattri Road early this morning.

Jantree Harnhong, 30, was on her way to Phuket with her 33-year-old partner Noppol Karnjanaburi and four others when the accident occurred in front of Muang Thalang School at about 1:50am.

“The 46-year-old driver, Wit Nakam, [Mr Noppol’s cousin] said that they were heading back from Bangkok after picking up Ms Jantree and her 6-year-old son,” said Lt Suporn Muangkai of the Thalang Police.

“Mr Wit fell asleep at the wheel. Thawatchai Sali, who was sitting in the front passenger seat, grabbed the wheel, but couldn’t avoid the collision.”

Several of the passengers, including Mr Wit’s 15-year-old son were thrown from the vehicle by the force of the impact.

Mr Thawatchai, however, was pinned under the rolled truck. Rescue workers from the Kusoldharm Foundation had to flip the car in order to save him.

All the victims were rushed to Thalang Hospital, and then later moved to Vachira Phuket Hospital, where they remain.

Mr Thawatchai is in the Intensive Care Unit, while the five others have all regained consciousness and are under doctors’ supervision.

“Ms Jantree and her baby are out of danger, but we have them both under constant supervision,” a doctor at Vachira Hospital told the Phuket Gazette.

Mr Thawatchai remains unconscious. He suffered head injuries and several broken ribs. He is on an assisted breathing apparatus, the doctor added.