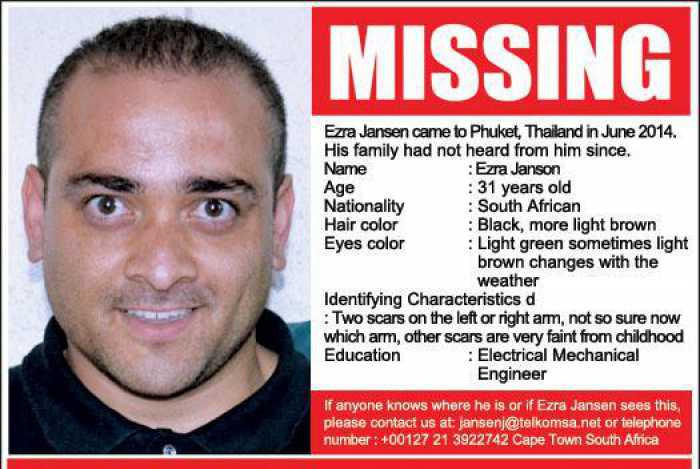 PHUKET: Top island officers have yet to receive an official request to find a South African man who was last known to be in Phuket in June.

Arayaphan Pukbuakao, a Phuket Provincial Police deputy commander, told the Phuket Gazette yesterday that he had not received a report about Ezra Jansen, 31, who is being treated by the South African Embassy as a missing person.

Ezra’s family is still asking, and waiting, for any information about their beloved Ezra, who last contacted his mother on June 11, the day after he arrived in Phuket for a one week holiday (story here).

“I have not been made aware of any request to find the missing person,” said Col Arayapan.

“As we have yet to be contacted by the Embassy, we cannot begin an investigation. We need an official request for that.

“In the meantime, I hope that Mr Jansen is doing well.”

As of yesterday, neither Phuket Immigration Superintendent Sunchai Chokkajaykij nor Phuket Tourist Police chief Urumporn Koondejsumrit had received a notice about Ezra from the Embassy.