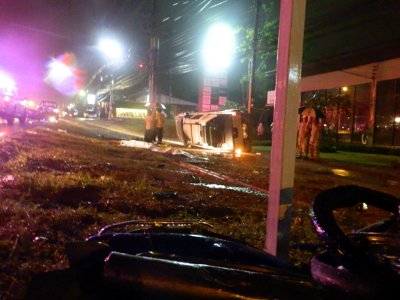 PHUKET: A family of three from Uttaradit province died when their motorcycle was hit by a pick-up truck in the rainy conditions in Phuket last night. Also killed was the unborn child of the pregnant mother.

Thalang Police were notified of an accident near the entrance to the Baan Wana housing estate on Srisoonthorn Road, about three kilometers west of the Phuket Heroines’ Monument, at about 9:30pm.

Led by duty officer Somkhid Khawsang, Thalang Police and Phuket Kusoldharm Foundation workers raced to the scene, where they found a crumpled motorbike and three bodies lying on the pavement.

Dead at the scene from multiple trauma injuries were 25-year-old Uttaradit native Suphat Punted and a boy aged about nine or ten years, presumed to be his son.

Kusoldharm Foundation workers performed CPR on the only survivor, a woman in her 20s presumed to be the wife of the late Mr Suphat. She was still alive when she reached the emergency ward at Thalang Hospital, but died shortly thereafter. A preliminary examination of the body by medical staff found the woman was six or seven months pregnant.

Only Mr Suphat was carrying identification at the time of the crash.

Nearby the motorbike was a Phuket-registered Nissan Navara pick-up truck turned over on its side, with a badly damaged front bumper and hood, its headlights still illuminated.

Police found the driver, a man in his 40s, among the crowd gathered at the scene.

Sensing the potential for danger among the growing crowd of locals who braved the rain to view the accident scene, they took the man into custody for his own protection as well as initial charging.

The driver did not flee the scene, as some media have reported.

Thalang Police initially suspect that the driver of the motorbike, presumed to have been Mr Suphat, may have been at fault for pulling out of a side soi too quickly for the truck to brake in time. They will continue to investigate the cause of the crash today, a rescue worker told the Gazette.

No crash helmets were found at the scene, he added.

The area where the crash took place is a straight, well-lit section of Srisoonthorn Road.

The poorly-lit, curved stretch to the east of last night’s accident has been the site of numerous fatal road accidents over the years, the most recent being the death of a Phuket Wittayalai student who crashed into the back of a pickup on Friday afternoon.