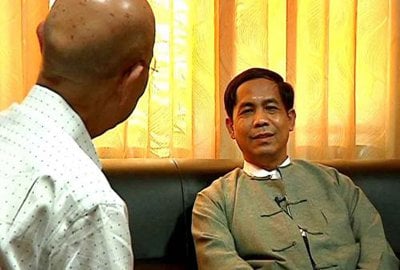 Reform in Burma is irreversible : aide
PHUKET (The Nation): Burmese President Thein Sein’s chief political adviser, Ko Ko Hlaing, says Burma’s political reform is “irreversible” because of the president’s strong will, the specific constitutional stipulation towards democracy, the Burmese people’s taste of new-found freedom, and the need for the country to follow the international trend.

In an exclusive interview with The Nation, the man known as Burma’s “political insider” said he was certain that former military leader Senior General Than Shwe was not running the country from behind the scenes and would not make a comeback.

“As a Buddhist, you can understand the mentality of an elderly Buddhist. You should understand also the mind of a soldier – who has always the desire to accomplish his mission. After the mission is accomplished, he can take a rest. He [Than Shwe] had taken the responsibilities of the state for a long time and there were many hardships, pressures and difficulties. But he did the best for his country. He built a lot of bridges, roads and dams. He also laid down the conditions of democratic reform – the seven-step road map. He is now enjoying his retirement with his grandchildren,” Ko Ko Hlaing said.

Asked whether Than Shwe may be dictating the government from behind the scenes, the presidential aide said: “As far as I know, he has totally resigned from politics. He doesn’t want to be involved in this new set-up. He told some of his colleagues and some senior military officers that he had resigned from politics. He is not like Deng Xiao Ping of China or Lee Kuan Yew of Singapore [who retained considerable power after stepping down from the top political posts].”

Responding to a question about whether the former military strongman is afraid to be taken to trial by a civilian government, Ko Ko Hlaing said: “This is a Buddhist country. Forgiveness is our principle. Also, Aung San Suu Kyi and the other opposition leaders, old and young, have talked about forgiving and forgetting the past and trying to do the best for the nation.”

National League for Democracy leader Suu Kyi has said she is not clear whether the Burmese military establishment is solidly behind the reform “and until I know that they support the reform fully, I cannot say that the process is irreversible.”

The presidential adviser said Suu Kyi had for a long time been under house arrest and, even when she was in the country, she had been kept in isolation for many years. “It’s now only a few months since her release. So, this is the time she is trying to cope with the current situation. It’s quite natural that she doesn’t fully trust the Myanmar [Burma] military yet.”

“We have faced much turbulence and [many] riots in the past. We don’t want to return to the past. The Myanmar government and the people wholeheartedly want a smooth transition. It’s a top-down process. We started with a bottom-up approach in 1988 but, during 2004-2011, it was a top-down process. Why? Because we would like to see a very smooth transition. At that time, there was no Arab Spring. But we have to admit that we have had a long history of insurrections and insurgencies. That’s why the role of the military was quite significant in our politics,” he said.

Burma at the time was risking disintegration like Bosnia. “The military tried very hard to keep the country intact at the peak of the Cold War between the Eastern and Western blocs. We also had to protect our territorial integrity. It was a very hard time for the Myanmar army. This experience has always haunted the military leaders.

“That’s why the Myanmar military wants to have a role in the political arena, not to dominate the political stage but to take part as an element – as a balancing sector. That’s 25 per cent of the seats in parliament. The Indonesian constitution used to have a nearly 40-per-cent military presence in parliament,” he said.

“Every revolution started from evolution,” he added. “The military regime [in Burma] back in 1988 had an idea to return power to the people and to build a democratic society, but for many reasons, the process took over two decades.”

Ko Ko Hlaing pointed out that the fall of the Berlin Wall happened in 1989, and that the Tiananmen incident in China took place the same year. But in Burma, the “people’s uprising” had broken out in 1988.

“Actually, Myanmar was a pioneer in the democracy movement. At the time [1988], it was a bottom-up activity. People had suffered social economic hardship for a long time. When the spark occurred, there was an uprising. Unfortunately, there followed anarchy in our country. The defense services of Myanmar had to take responsibility of the state in August of that year. And as soon as the military took power, they promised that one day they would return power to the people. At the time, the political opposition forces were quite nervous and frustrated after the political turmoil. They wanted democracy instantly – within a short time – but the situation was quite chaotic. At the same time, we have many minority groups,” he said.

The presidential adviser explained that at the time, the biggest rebel group was the communist party. The BCP, together with other minority groups such as the KNU (Karen National Union), exploited the political instability by launching huge offensives against the government forces in the remote areas near the Burma-China and Burma-Thailand

borders. They were very fierce battles, he said.

“His workload was rather heavy. I sympathize with him,” she said.

Bantoon would become her new adviser, she said after the weekly Cabinet meeting.

“I will make the selection myself,” she said.

However, she would not wait for one of the banned politicians to complete his or her five-year ban to serve in the post, she said.

A source said Prommin Lertsuridej would likely become the new PM secretary-general when his five-year ban from politics ends in May.

He was proposed by outgoing acting government spokeswoman Thitima Chaisang, who is becoming a secretary to Deputy Prime Minister Kittiratt Na-Ranong, who is also the finance minister.

Parties facing up to problem of boozed MPs
PHUKET (The Nation): Pheu Thai MP Paijit Sriworakhan, as chairman of the committee on House affairs, said the committee would discuss measures to prevent alcohol consumption in the Parliament compound during a meeting tomorrow morning.

Incidents of drinking are reported to have happened many times before, especially late at night, but Chalerm’s case had received much public attention.