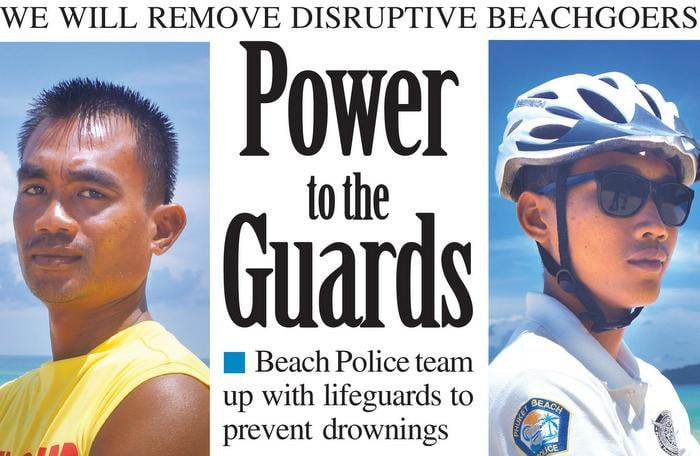 With the new initiative, lifeguards will now inform police officers of any unruly or disobedient swimmers or visitors.

“If lifeguards can’t stop tourists from swimming, we are ready for them. We can be there to help talk to the them,” said Lt Col Pornarong Karnorachai of Karon Police. “We believe that they will be calm and more apt to listen to us, so that we can save them from entering the dangerous currents.”

In the past, swimmers who neglected lifeguards’ warnings would be met with a barrage of whistles and commands, and in worse-case scenarios, have a jet ski laden lifeguard ride up to them and urge them out of the water.

“Sometimes fights can break out when a tourist doesn’t understand English and is ignoring our warnings. It’s good to know that the police will be available to help us,” he said.

Col Pornarong noted that if someone is unable to communicate in English or Thai, the force has volunteer interpreters who can speak several languages to help diffuse hostile situations.

Last year, Kata and Karon were responsible for half of the island’s drowning deaths, confirmed Nararit Touyon from the Tourism Department of the Phuket Provincial Administration Organization.

Even so, Col Pornarong explained that the police have no intention of pressing charges against angry tourists unless it’s absolutely necessary.

“If a tourist becomes disruptive, they will be taken to the police station to calm down. They may need to sign a report stating that they have been aggressive or drunk,” Col Pornarong said. “And we will explain to them that if they are involved in an accident after being warned, this document will be attached to their file and, in some cases, may cause them or their family members difficulty when filing insurance claims.”

Karon Beach Officer Lance Corporal Pitsanu Singhara assured that beach police have the full authority to arrest anyone who breaks the law and are able to remove tourists from the beaches if they are aggressive or drunk.

“If we see it is necessary to get the tourists to calm down, we will do so,” said LCpl. Pitsanu. “Even though those of us patrolling the beaches are there for only a few hours at a time, lifeguards will always be able to reach us if they need assistance,” he said.

Col Pornarong confirmed that the Beach Police are currently patrolling both Kata and Karon beaches every day and night and will also be trained in life-saving skills.

Though police will be trained to assist in an emergency, Mr Uten noted that it would not be their duty to jump in the water and save swimmers.

“We do not expect police to help rescue people from the water,” Mr Uten said. “The fact that they are there to help us prevent people from swimming in dangerous areas is already a huge help.”

“But if that day comes, it’s good to have more people who have life-saving skills on the beach.”

Col Pornarong admitted that there will always be a few glitches to work out in the beginning, but is confident that once the adjustment period is over, everything will run smoothly.

The Beach Police initiative was first presented to the public by Phuket Provincial Police Commander Patchara Boonyasit last November, as he wanted to have officers on the beach to serve and protect tourists.

Later that same month, the first group rolled into action in their polo shirt uniforms, mounted on their patrol bicycles.

“Phuket is a famous tourist destination that has many beautiful beaches and we want to ensure people’s safety while they are here,” Maj Gen Patchara said on the day of the launch. “Safety is our top priority.”

Gen Patchara has given his full support to the new lifeguard-police initiative.

“Although we have the Karon Police and Beach Police on patrol, I don’t think it’s enough. Having lifeguards and police work together and share their skills to help prevent accidents on the beach is a great idea,” Gen Patchara told Phuket Gazette. “It will help move the police network forward, as police may not be able to be on the beach all of the time.”

Gen Patchara also urged tourists to obey the warnings of lifeguards rather than involving the police or risking their lives.

“Please do not ignore the red flags. It’s all for your own safety. We see a lot deaths because people ignore warnings. Please follow the rules so that you have a safe and happy trip on the island.”

Watcharin Pathomwatanapong, chief administrator (Palad) who heads the Phuket Provincial Administration Organization (OrBorJor) and Karon Mayor Thawee Thongcham were not aware of the new efforts set forth by the police and lifeguards, though they both said they could see nothing but good things coming from it.