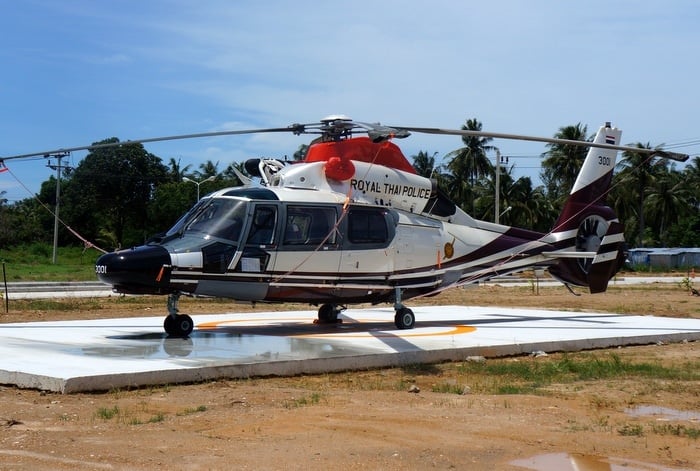 PHUKET: A Royal Thai Police rescue helicopter will be stationed on Phuket to help boost tourists’ confidence in their safety while visiting Phuket, Phang Nga and Krabi, it was announced at the grand opening of the Region 8 Headquarters this morning.

“With the Region 8 Headquarters now based in Phuket, residents and tourists can be confident in their safety, as well as those in nearby provinces,” said National Police Chief Gen Somyos Pumpanmuang.

“The rescue helicopter is only one of two in the country and will serve the entire region.”

The helicopter and its crew have yet to be dispatched to the island, as they are still undergoing training, confirmed Gen Somyos.

Hundreds of people joined the opening ceremony at the headquarters, which is based near the Tah Chat Chai Checkpoint, the gateway to Phuket.

“I think it’s very good that the Region 8 Headquarters is based in Phuket. Obviously, Region 8 is an extremely large part of Thailand. However, I think there is a strategic advantage for the move to Phuket, as Phuket is a growing province. And the provinces around Phuket – Phang Nga and Krabi – are growing all of the time too,” said Phuket Honorary Consul Martin Carpenter.

“The benefit to Phuket and the surrounding provinces will be the fact that the headquarters are nearby. I think that will be beneficial for all policing in the area, but I don’t think it will have a detrimental effect on other parts of Region 8.”

The Region 8 Police Headquarters had a soft opening last month with several systems still in need of work to be fully up and running (story here). The ground breaking ceremony for the facility was in July 2013 (story here).

Power to the guards