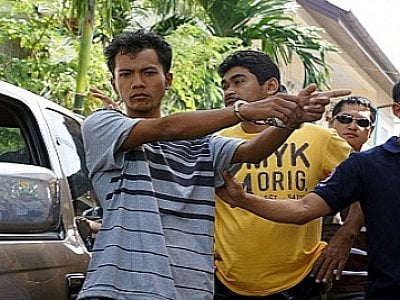 PHUKET: Police yesterday arrested a brother and sister who they believe orchestrated the execution of Sumittra Namfak, 55, in Phuket on Saturday.

Ms Sumittra was shot at close range in the back of the head while watching television in her home in Thung Thong.

Winaporn Rathakarn, 46, was arrested in Pa Khlok, Thalang, near the Heroines’ Monument.

Her brother Sirawat Rathakarn, 44, was arrested in Koh Yao District in Phang Nga.

An officer at Thung Thong Police Station told the Phuket Gazette that the siblings are originally from Klong Thom in Krabi.

“The woman has confessed to paying 100,000 baht for the contract killing. She gave the money to Sirawat and another man, a Thai man, who we are still searching for.

“This other man is suspected of teaming up with Sirawat to hire the killers,” the officer said.

Police are trying to contact a 62-year-old British man who had been romantically involved with Ms Sumittra for two years, a relationship brutally cut short by her murder on Saturday.

“This man met Winaporn first and was in a relationship with her for four years before he met Ms Sumittra,” explained the officer.

“He was very much in love with Ms Sumittra. He apparently gave her lots of money. We have been told the amount is in the millions of baht. This apparently made Ms Winaporn very angry.

“We have emailed the British man and are awaiting his reply,” he said.

Phuket Police are expected to hold a press conference today to release more details about the crime.