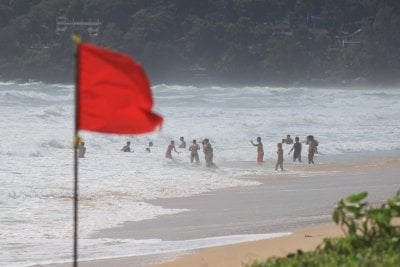 PHUKET: Current dangerous surf conditions and a spate of drownings at Phuket beaches in recent weeks have prompted officials to introduce new safety measures to guard against tourists from drowning.

New signs warning tourists in seven languages of the danger of swimming in Phuket during the treacherous monsoon season have been posted along Phuket’s southern beaches.

Meanwhile, the Phuket Governor is pushing for all tourists entering the country to also receive an automated message on their mobile phones warning them to beware of the monsoon surf.

In Karon, which has consistently recorded the most drowning deaths in recent years, the municipality will post 15 large warning signs at highly-visible locations along Kata, Kata Noi and Karon beaches. The warnings, clearly stating the dangers of ignoring red warning flags, come in seven languages: Thai, Chinese, English, Russian, French, Korean and German.

Supachai Janphet, chief of the Sea Rescue Center, wants tourists to understand the risks they are taking if they enter the surf where red flags are flying.

“Karon Municipality has put up big notice boards at the popular tourist areas for the past four years warning tourists not to swim in red flagged areas. The signs also advise caution when swimming in designated ‘safe zones’ during this time of year,” he said.

The safe zones, marked with yellow and red pennants, indicate areas where lifeguards are at the ready to assist swimmers in distress. Lifeguards establish these zones after monitoring them for the presence of riptides.

Although lifeguards try to warn swimmers by placing red flags along beaches, they routinely have to rescue overconfident swimmers who pay no heed to warnings.

“We often hear the excuse that they are athletes or a strong swimmers,” he lamented.

The latest victim in Karon, 33-year-old Denis Korobogatov of Russia, entered the surf at Karon Beach on the afternoon of May 31. He was quickly pulled out to sea by the notorious “permanent rip” that forms annually offshore from the Thavorn Palm Beach Resort at this time of year.

Two lifeguards rushed to his assistance and pulled him ashore within about five minutes, but he was pronounced dead on arrival at hospital.

Meanwhile, Phuket Governor Tri Augkaradacha is working on a more high-tech approach to warn tourists. His office has been in communication with several telecommunications firms to find a way to develop automatic text messages to greet tourists who arrive at Phuket Airport. When they activate their mobile phones there using “international roaming” services, information about dangerous surf conditions and other important tips could follow the initial greeting, he said

“I have discussed this with my IT team and I see a high possibility it could really happen. I also want tourists arriving in Phuket for the first time to get the impression that this is a truly international destination,” he added.

“I have discussed this possibility with the Phuket Office of the National Broadcasting and Telecommunications Commission, TOT and CAT Telecom,” said Governor Tri.

It might also be possible to transmit similar messages to all mobile phone users as they enter the local network, he added.

The initiative is just one of many technological solutions the provincial government is working on in the aftermath of two public panics that followed a pair of large earthquakes off the coast of Sumatra on April 11.

Confusion and panic resulted when a tsunami warning was issued, local mobile phone networks crashed and the public were unable to get information through the state-run media.