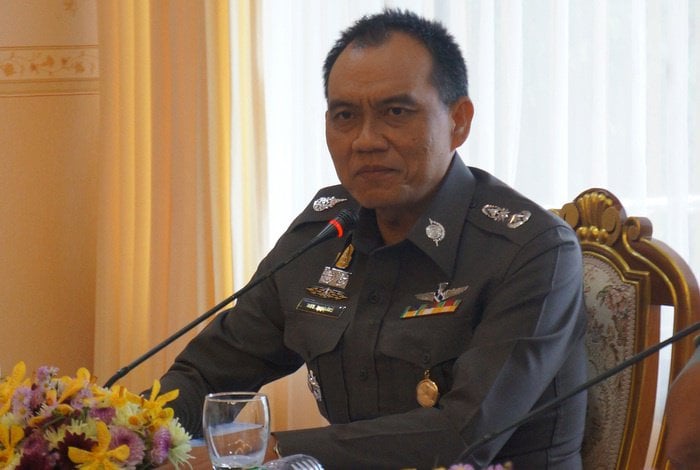 PHUKET: Phuket Provincial Police Commander Patchara Boonyasit declined to confirm or deny rumors that some of those wanted for instigating the violent attack on Thalang Police Station had already fled the province.

“Police are working on the case. I prefer not to talk about what progress has been made,” Maj Gen Patchara told the Phuket Gazette this afternoon.

Thalang Police Superintendent Chanuchan Cholsuwat explained that he was unaware of the suspects fleeing, if in fact they have.

“We do not know whether or not they have left the island, as arrest warrants have not yet been issued for them,” Col Chanuchan said.

“We know you are hungry to know what is happening with the investigation. However, I would prefer not to talk about the case until the warrants are issued.”

On Tuesday, Gen Patchara announced that police had photographic and video evidence showing the nine suspected instigators taking part in the riot. However, he declined to name any of them.

“Most of them are local teenagers living in Baan Don who are involved with drugs or other criminal activity. They have criminal records,” Gen Patchara said. “I think the serious rioting was not about the deaths of the two men, but rather a revenge attack by the teenagers.”

Though only nine have been identified so far, police expect to be able to name a number of other suspects before the case is closed.

“If they have left the island, we still have ways of catching them and bringing them to justice,” Col Chanuchan confirmed today.