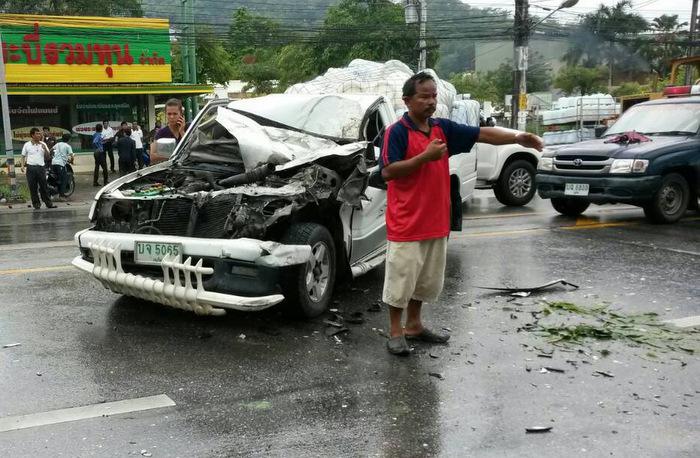 PHUKET: Police yesterday quickly whisked away the driver of a six-wheeled truck that killed two people and injured four others at Phuket’s notorious “100 bodies curve” on Chao Fa West Road, to spare him from the wrath of an angry mob.

Uthai Pilaput told police that he was heading northbound at about midday when he lost control on the wet road and rammed a gray Honda Jazz.

When police arrived, Boonlert Udomtham, 46, was dead on the back seat of the car.

“He suffered head trauma and his right leg and right arm were broken,” said Lt Thapanee Warinsaad of the Wichit Police.

Sangwan Suwanmanee, 75, who was also sitting on the back seat, died of her injuries en route to hospital, Lt Thapanee added.

“Also injured in the car was the driver, Karnpong Sabsamroeng, who suffered a broken right arm,” she said.

“His wife, Mrs Sumalee, and their son, Kritanat, 9, both escaped with only minor cuts and bruises. Mrs Sumalee was sitting in the front and the boy was sitting on Mrs Sangwan’s lap.”

A blue Honda Jazz driving behind the Sabsamroeng family’s Honda was also involved in the accident.

However, a pick-up truck hauling large water bottles suffered extensive damage when it ‘rear-ended’ the six-wheeler.

“The six-wheeler finally stopped when it hit a tree.

“Mr Uthai has been charged with reckless driving resulting in death.”

Last Sunday, villagers outraged by officials’ continuing inaction to make the curve safer blockaded the busy road (story here). The blockade disbanded only after Phuket Governor Maitri Inthusut spoke to the mob and agreed to implement safety measures. Some of these measures were implemented just days ago (story here).