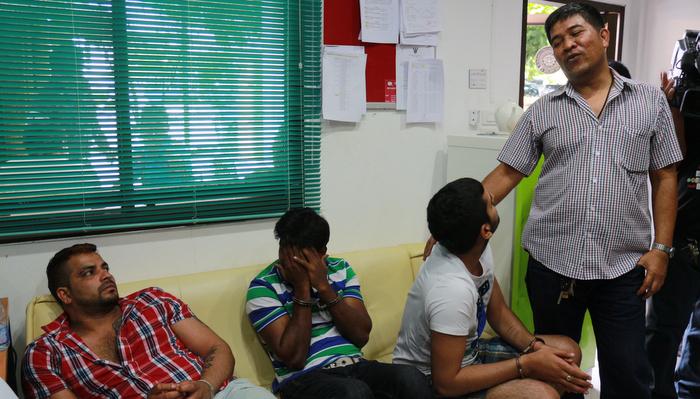 PHUKET: Five foreigners believed to be part of a skimming network stretching across Thailand were arrested in possession of multiple credit cards under different names and 700,000 baht in cash yesterday.

Three were caught in the process of skimming an ATM in Karon. The other two were apprehended as they were allegedly attempting to evade officers.

The men were named by police as Viothan Thiyagarsa, 29, from the Netherlands; Gnanapooranan Ratnasabapathy, 51, travelling on a Norwegian passport, but originally from Sri Lanka; Nesaruban Arunachalam, 28, from India; Hussain Qasim, 31, from Norway; and Qaiser Abbas Shah, 20, also from Norway.

“We suspected that they were part of a skimming gang, and have been monitoring all five men since they arrived in Phuket,” said Karon Police Superintendent Nathapakin Kwanchaipruek.

The men have visited Phuket three times in the last year. Instead of leaving a deposit with a credit card at the hotel, they always left their passports and then paid for the rooms in cash after a day or two, explained, Col Nathapakin.

“They stayed for about a week at a time,” he added.

Police swooped in to make the arrests after a local tipped them off that Mr Thiyagarsa was spending an inordinate amount of time at the ATM in front of the Metadee Resort and was using multiple cards to make withdrawals, explained Col Nathapakin.

“Officers rushed to the scene, confronted Mr Thiyagarsa and asked to search his bag. Inside, they found multiple ATM cards and a wad of cash,” said Col Nathapakin.

“After speaking with Mr Thiyagarsa, officers set out to track down the other four suspects.”

Mr Ratnasabapathyr was caught in the act withdrawing money from an ATM at the Ket Kwan junction in Karon and, soon after, Mr Arunachalam was arrested using an ATM in front of the DD Massage Shop, also in Karon, said Col Nathapakin.

“The three scammers were found with a total of 700,000 baht between them,” he added.

Mr Qasim and Mr Shah were caught as they were allegedly attempting to evade police near the Nanai 9 Residence where they were staying.

“We believe these men are part of a scamming network in Thailand, and that there will be more like them. We are continuing to investigate this lead in an effort to stamp out ATM skimming on the island,” said Col Nathapakin.

The five suspects have been charged with ATM fraud.