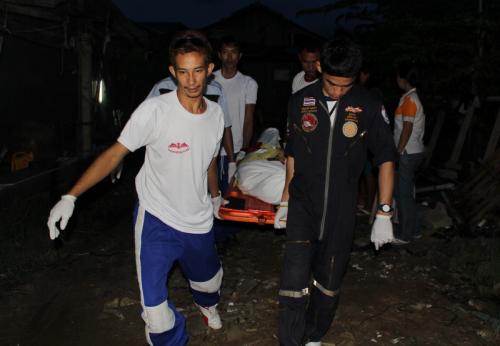 PHUKET: Police are investigating the death of a woman who reportedly committed suicide while her husband was out drinking and her 14-year-old son was next door playing with neighbors yesterday afternoon.

Phuket City Police officers were called to the scene, a construction workers camp on Soi Kingkaew Uthit in Rassada, at about 5pm.

They arrived to find Saeng-ngern Trairoj 54, dead from asphyxiation and her partner, Samarn Sroipuang, 45, from Saraburi, sitting beside her body

“He had been drinking,” said police officer Lt Kraisorn Park-Aree.

Mr Samarn told police he went to a friend’s house in the morning.

“She was home alone all day,” he said.

“I came home and found Saeng-Ngern had hanged herself with my sarong. I called for the neighbors to quickly help me get her down, but she was already dead.

“I have no idea why she committed suicide,” Mr Samran said.

The 14-year-old son had stayed home from school as he had a fever.

“She called me home for lunch, then I went back over to my friend’s place. The next thing I knew my dad shouted out that mum had killed herself,” he said.

“I ran back home, and when I saw her I was in shock. “Mum often said she wanted to kill herself because she was so stressed, but I never thought she really would do it,” said the boy.

“Her body has been transferred to Vachira Phuket Hospital for a port-mortem examination. We will review the report and decide if any further investigation is required,” he said.