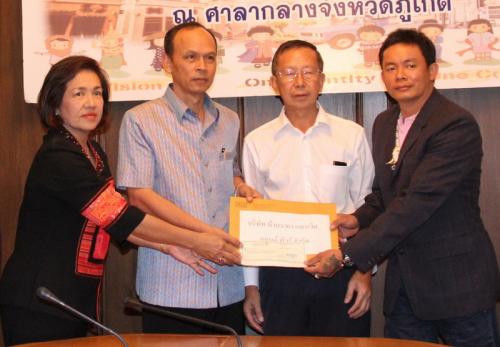 PHUKET: Representatives from Phuket’s tourism industry stepped forward this week to provide one million baht in compensation to the family of a Chinese tourist who drowned while swimming off Racha Yai Island last year.

Yuan Dingrong, 56, drowned after getting into difficulties while snorkeling off La Bay at Rachai Yai Island, about 25 kilometers south of Phuket, on November 20 last year (story here).

Ms Yuan was spending a week in Patong on holiday with nine family members.

Ms Yuan’s daughter noticed that something was wrong after about 10 minutes of her mother being in the water.

Tour operators pulled Ms Yuan back into the boat and rushed her back to Phuket, where she was transferred to Phuket International Hospital.

Ms Yuan was declared dead the next day.

“This is a good example for other insurance companies in that that they are taking responsibility for their customers,” Mr Tan said.

“This helps develop a good image for Phuket and for Thailand,” he added.

Methasit Anansiriphan, manager of the AIG Insurance Phuket office, handed over the cheque to the victim’s family.

Present for the handing over of the cheque at the Provincial Hall was Phuket Vice Governor Somkiet Sangkaosuttirak.

The payout on Thursday came as the Senate Standing Committee for Tourism, headed by Phuket Senator Tunyaratt Achariyachai, conducted an inspection tour of the major tourist beaches along Phuket’s west coast (story here).