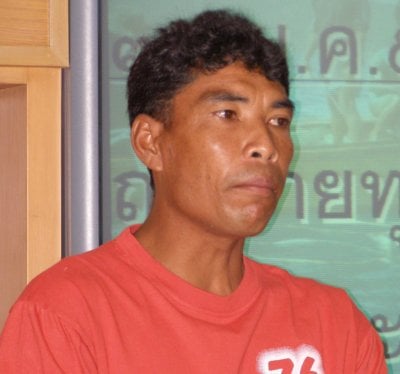 “I received a report from two sea gypsies on January 31 that someone cut their oxygen line while they were diving about 4 pm that day,” Col Peerapan said.

“The next morning the suspect was found and the sea gypsies identified him as the man who cut their oxygen line. I am now completing the report to be sent to the Public Prosecutor, who will press charges.”

The meeting, chaired by Phuket Vice-Governor Tri Augkaradacha, was attended by Suthin Baromajet from the National Human Rights Commission of Thailand and representatives from the Rawai sea gypsy community and the Rawai Tambon Administration Organization.

Chana Hadsaithong, a sea gypsy from the Rawai community, said, “I’m one of six who were threatened by a businessman. I need the Muang District Chief or the Vice-Governor to help us.

“We cannot work like we did before, we feel at risk. We need to know why tourists can dive around the island but we can’t. Even the fish trap that the Fisheries Department gave us was destroyed by someone.”

Rawai sea gypsy Niran Yangpan added that some people were still being threatened by a businessman at Yanui Beach.