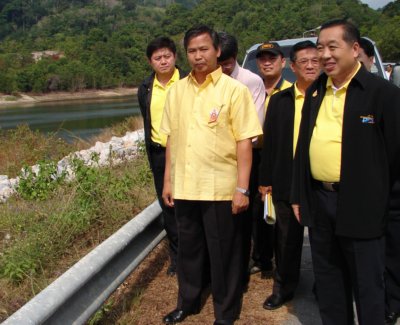 PHUKET CITY: Despite a spattering of some much welcome rain on the island yesterday, provincial authorities are preparing for water shortages as Phuket is expected to endure more hot weather before the annual rains arrive in May.

At a March 15 meeting at Phuket Provincial Hall chaired by Phuket Vice-Governor Worapoj Ratthasima, Aroon Kerdsom, Chief of the Phuket Office of Disaster Prevention and Mitigation (ODPM), said, “Phuket has a 50-million-baht reserve to use in case of an emergency, from which the Governor has already approved each district 500,000 baht to help people who do not have water.

“And if that is not enough, the Governor can approve more money within three days. Now we [the ODPM] have about 180 volunteers, 23 feed pumps and 50 water trucks on stand by to help villagers without water.”

K. Aroon added that his office has asked local authorities to add chlorine to their water reserves as their levels fall. “We want water to be safe for people to use in the dry season too,” he said.

Phuket Provincial Irrigation Office (PPIO) Chief Isara Anukul explained to V/Gov Worapoj that Bang Wad reservoir is half full, which should last long enough until the expected rains arrive at the end of April.

However, he added that the Southern Meteorological Center West Coast forecasts hot weather in Phuket for the rest of March with the possibility of only some patches of rain, and that the center forecasts the same for April, but with a higher chance of rain.

“Phuket Provincial Water Supply and Phuket City Municipality Water Supply use about 1.1 million cubic liters a month, so we should not have problems for three months,” he said.

However, if the rains do not arrive in time he said he would call in the Royal Rainmaking Project to help encourage the clouds to let loose on Phuket.

Phuket’s water problems are attracting the attention of some Bangkok officials. On March 16, Samart Chokkanapitak, the Director General of the Royal Irrigation Department, inspected the Bang Wad reservoir and had Phuket’s recurring water shortage problems explained to him.

The Thai Third Naval Command is offering to supply water to people in remote drought-stricken coastal and island areas in Phuket, Phang Nga, Krabi, Trang, Satun and Ranong provinces. A Royal Thai Navy boat will deliver the water to areas that need it.

People can request the free water from the Third Naval Command by calling 076-391598.