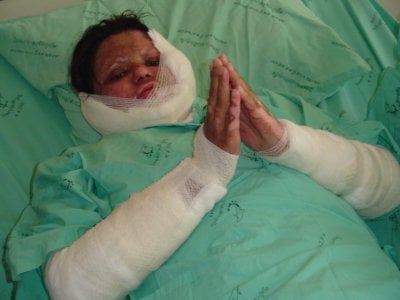 PHUKET: Saijai Phromdaen, the woman set on fire at Patong Beach in February, is continuing to improve at Vachira Phuket Hospital, where she is undergoing skin graft surgery.

Pennee Phromdaen, K. Saijai’s mother, told the Gazette that Saijai’s wounds are healing properly and she is now able to speak, eat basic foods and wash herself.

“Every day she exercises by walking around the hospital. The doctor told me that she will have to stay in the hospital until around May.

“I don’t know if any government organization has paid any money to the hospital for the treatment. One foreigner donated 12,000 baht to us. Now we don’t have to pay anything because Saijai has state medical insurance,” added K. Pennee.

The foreigner she refers to is German Dr Jerry Hoss, organizer of the SaijaiAid fund to help K. Saijai.

Those seeking to make a direct donation can visit K. Saijai at Room 9 at the Rattanakosin 200 Pi Building at Vachira Hospital.

People overseas or in other parts of Thailand can contribute by sending any amount of money, large or small, to: SaijaiAid@yahoo.com at the online fund-transfer service moneybookers.

Sombun Kaewkhaaw, who set fire to K. Saijai, is still at Suan Saranrom, the regional psychiatric hospital in Surat Thani, the Gazette has learned.

Citing patient confidentiality, the hospital refused to release any details regarding his condition.