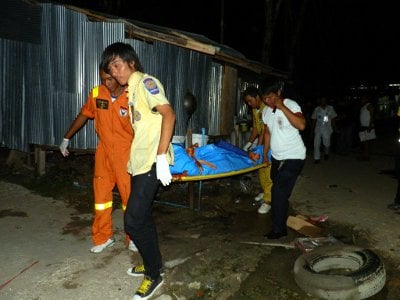 PHUKET: Phuket police are still hunting for those involved in a Burmese gang fight that broke out at a worker’s camp in the early hours of yesterday morning, leaving one dead and one seriously injured.

“Mr Myo’s head was cut and bleeding profusely, so we sent him to Thalang Hospital,” he said.

The body of the dead Burmese national Aung Ko Oo Ku, 28, was found in the rubber plantation in front of the camp, Lt Col Ekkasit explained.

“There were serious cuts all over the body, and at the scene we found a wood carving tool with blood stains on it,” he said.

Workers at the camp told police that Mr Myo was sleeping, when a group of people that he did not get along with threw a big rock onto his roof, challenging him to come out.

“Mr Myo answered the challenge by coming outside with about 10 other people,” Lt Col Ekkasit said. “The men already waiting outside had a handful of weapons, and both gangs started fighting.”

Police are still investigating the incident and searching for suspects, he added.