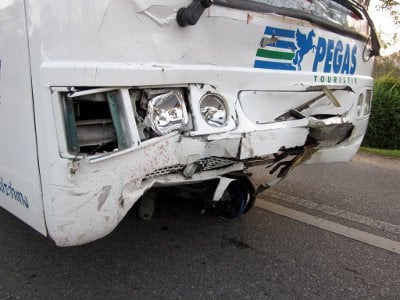 PHUKET: Phuket police have identified, but not caught, the bus driver who fled the scene after his bus struck a motorbike on Thepkrasattri Road and killed two women on Wednesday.

“We contacted the driver’s employer, allowing us to identify the suspect,” Thalang Police Sub Lt Chatree Chuwichian told the Phuket Gazette this morning.

“We are waiting for them to contact the driver, and to have him surrender himself to police. Otherwise, we will have to issue an arrest warrant for him,” he said.

Police plan to charge the man for negligent driving resulting in death.

Sub Lt Chatree did not specify to the Gazette how long police would give the suspect to turn himself in.