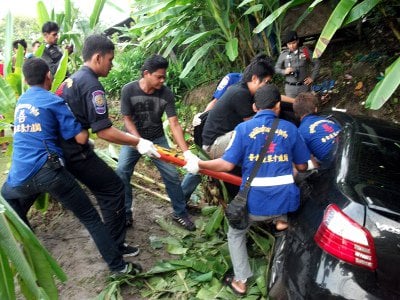 Patong Police received the report of the incident at about 5:45am, said Lt Col Pratuang Polmana.

“At the scene we found the man dead in a black Toyota Vios registered in Udon Thani Province,” Lt Col Pratuang told the Phuket Gazette.

Police suspect the man, who was only wearing swimming trunks at the time of the accident, died from blunt trauma to his head and chest.

“Witnesses living in the area said the car was travelling toward Kamala at a high speed. The driver then seemed to lose control at the curve about 1.5 kilometers past Baan Kalim School,” he said.

Police searched the car, but were unable to find any documentation that would allow them to identify the man.

The body is currently being held at Patong Hospital.

“His relatives will probably contact the police or the hospital soon,” Lt Col Pratuang added.