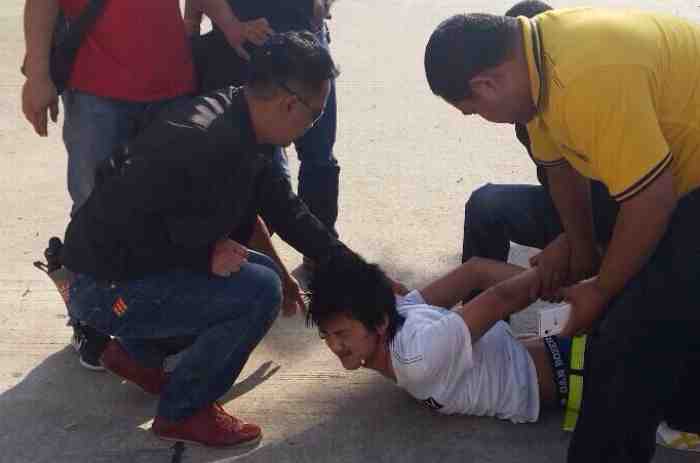 PHUKET: Police tracked down and arrested two men at a bus station in Phang Nga yesterday after one of the suspects shot a rival gang member in the face in a shootout on the streets of Patong just hours earlier.

Staff at Patong Hospital notified the police of the shooting at 5am after Boonprom Chupeng, 18, was rushed to the facility with a bullet wound to his left cheek.

Lt Col Sutthichai Tianpho of the Patong Police led the investigation, which resulted in his team of officers reviewing CCTV footage of the shootout, in front of a 7-Eleven on Nanai Soi 8 at 4:40am.

Quick action by the police soon identified the gunmen as Sakolrat Sae-Sue, 20, of Phuket Town, and Orotsa Piboon, 25, from Nonthaburi.

“We quickly obtained arrest warrants and learned that the men were at the Khok Kloy bus terminal in Phang Nga, where we arrested them just after 9am,” Col Sutthichai added.

Officers found two loaded handguns and ammunition in the pickup truck the men were sitting in when the police arrived.

“From our information, I believe this was a revenge attack. The suspects had some conflict [with Mr Boonprom] and they wanted to end it,” Col Sutthichai said.

“However, the victim was not alone at the time he was shot. He was accompanied by friends, who also had guns and shot at their rivals.”

Mr Sakolrat and Mr Orotsa were both charged with attempted ‘murder by a gang’, and with ‘carrying weapons in public without a permit’.

“We will take a closer look into this situation, and we will investigate Mr Boonprom’s background,” Col Sutthichai assured.

Woman, 23, jumps to her death before dawn on New Year’s Day