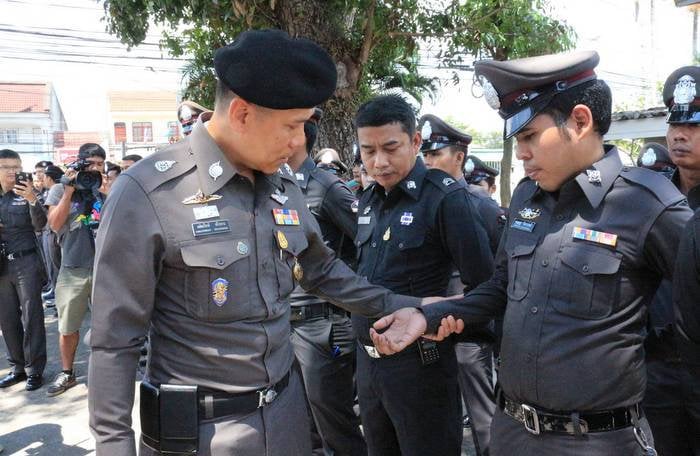 PHUKET: Police officials are still playing mum on the distribution of arrest warrants for those who instigated last weekend’s riots at Thalang Police Station.

Deputy National Police Chief Chalermkiat Srivorakarn paid a visit to the island yesterday to commend officers for their patience and hard work over the last week, and to offer support to those who were injured.

“I am here to follow up with officers and check on the investigation progress,” Gen Chalermkiat said after a closed door meeting with Region 8 Police Deputy Commander Teerapol Kuptanon and Phuket Provincial Police Commander Patchara Boonyasit. “As for the rumor of the issuance of 33 arrest warrants, I can not say. I am just now catching up on the case, but know that there are more than 20 investigators working on it.”

Gen Patchara also noted that he has yet to receive any official report regarding arrest warrants.

“I have not received any information from investigators about how many arrest warrants will be issued. Please be assured that justice will be served to all those who instigated the riot,” he said.

Gen Chalermkiat urged Gen Patchara to be fair to all parties during the investigation, as police and locals must be able to live and work together after the fact.

Investigators have been divided into three groups and are still in the process of collecting evidence against all involved, Gen Chalermkiat stated.

Family members of Chian Srichoo, 73, whose death may have been prevented had rioters not blocked his ambulance from reaching a hospital, plan to sue those responsible for initiating the mob (story here).

Gen Patchara urged relatives to make a statement to investigators as evidence against those involved.

“The instigators knew that there was a patient in the ambulance and still refused to let it pass through. They must not get away with that,” Gen Patchara said.