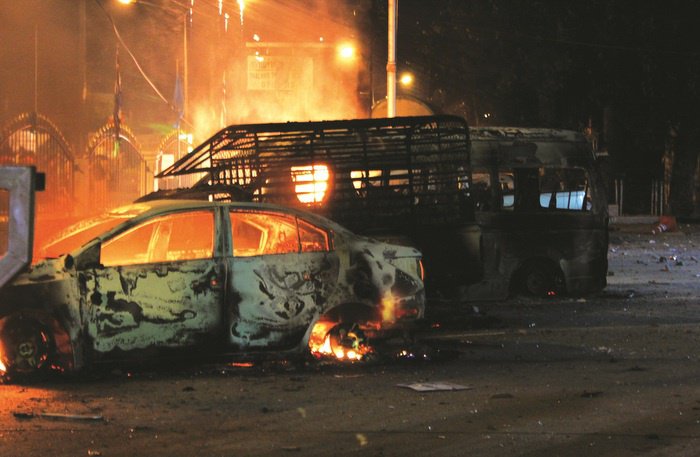 PHUKET: Though blockades, protests and other forms of mob rule appear to be an effective way for local Phuket villagers to kick-start official action, justice eventually catches up with the instigators, says Teenachat Jindangen, Commanding General of the 41st Military Circle.

The commander’s comments come fast on the heels of an unprecedented riot and attack on the Thalang Police Station and closure of Thepkrasattri Road on October 10. About 20 police officers were injured and more than 6 million baht worth of damage was done, as hundreds of rioters set fire to police vehicles and bombarded the station with bricks and rocks.

The catalysts for the violence were the deaths of suspected drug dealers Patomwat Panarak, 22, and Teerapong Srisamut, 17, who died in a police chase after allegedly refusing to be searched at a checkpoint.

Protesters claimed that the 50 pills of ya ba (methamphetamine) and one kilogram of kratom leaves in the young men’s bags had been planted by the police. The allegation was vehemently denied by Provincial Police Commander Patchara Boonyasit.

“Though the riots yielded immediate results with the Ministry of Interior demanding an investigation into allegations of excessive force by the four officers who crashed into the fleeing men, we would have conducted a fair investigation ourselves,” Phuket Governor Chamroen Tipayapongtada told the Phuket Gazette last Wednesday. “Now, we will not only ensure that this matter will be looked into, but we will also hunt down those who helped turn the peaceful protest into a violent riot, damaging Phuket’s international reputation.”

The deaths of Mr Patomwat and Mr Teerapong were most likely used as a cover by criminal teenagers in the local community to take revenge on police, said Maj Gen Patchara early last week. As of Wednesday, police had identified at least nine instigators, but had yet to seek arrest warrants.

However, the devastation of the lives lost and the parents’ fear of police inaction was very real, assured Governor Chamroen, who had negotiated with the parents and reached an understanding with them hours before the protesters turned violent.

“I understand that sometimes people feel they have nowhere to go but the streets to seek justice,” Gov Chamroen said. However, the need for this does not justify closing down major roadways or violence, he noted.

“Local people must change their mentality about the effectiveness of using violence to get their demands met. Think about what will happen to your family if you get arrested,” Gov Chamroen said.

“If you look back at previous protest instigators on the island, you will see that all of their leaders were arrested and charged for their crimes.”

Arrest warrants were issued for 10 people behind the March 4 blockade of the Patong Police Station. The more than 200 tuk-tuk-driving protesters who were shutting down the party town, an essential revenue stream for the province, demanded that the Patong Police Superintendent be transferred (story here).

Col Chiraphat Pochanaphan was quickly transferred to defuse the situation. A short time later, he resumed his position as the top cop in Patong.

Then in April that year, an angry mob shut down Thepkrasattri Road when villagers realized that police would not be bringing the twin brothers who had raped a pregnant 25-year-old woman to the scene of the crime for a reenactment (story here).

Somsak Pasarnphan, 41, was one of 10 suspects wanted for their role in organizing the blockade. He surrendered to Tah Chat Chai Police but denied his involvement.

A similar, peaceful road blockade took place that same month on Chao Fa West Road. It was only broken after the Phuket governor at the time agreed to have short-term safety measures installed at the dangerous ‘100 bodies curve’ within five days (story here).

A few months later, police hit the streets armed with arrest warrants for 23 people involved in the protest.

Sirichai Saengprichakul, 42, who turned himself in, apologized for his part in the protest. However, he pointed out that the community needed to gain the attention of the authorities.

“That curve was very dangerous. A lot of people have been killed there,” Mr Sirichai said at the time. “We blocked the road to get attention from the authorities. I did not expect to be arrested for it.”

Though the violence at Thalang Police Station was unprecedented in Phuket, prior to the National Council of Peace and Order taking over, blockades were clearly being used by different communities on the island to get their way.

Maj Gen Teenachat Jindangen explained that the number one goal of any military or government agency confronted by protesters, violent or non-violent, is to defuse the situation, which often means making immediate concessions.

“Once we are able to break up a protest or riot, we can start searching for a real solution to the issue,” Gen Teenachat said.

“Our number one priority is to assure that our officers do not use any form of violence against the protesters.

“The protesters may get what they want. However, they are breaking the law and will be punished.”

The Public Assembly Act of 2015 forbids people from blocking the entrance or exit of a government office or disrupting the work being conducted at the facility. Those found guilty of doing so face a maximum penalty of six months imprisonment, a 10,000 baht fine, or both.

Those seeking justice against officials or government offices should first present their cases to the Damrongdhama Center (ombudsman’s office) at Phuket Provincial Hall, Gov Chamroen explained.

“I am making changes to the work flow at the center and have asked the Public Prosecutor’s Office to review all cases that have eventually led to protests on the island,” Gov Chamroen said.

Damrongdhama Center Chief Prapan Kanprasang assured the Gazette that his office would seek justice for those who file a complaint.

“There are many ways to seek justice. Please follow a path that is within the law. Riots and protests, especially ones that cause harm to others, will not yield real results,” Mr Prapan said.

Those wanting to file a complaint can do so in person at Provincial Hall; send the complaint by mail to the Damrongdhama Center, Phuket Provincial Hall 5 Narisorn Road, Talad Yai, Muang Phuket 83000; or call 076-213203.

“Blockades, protests and riots can cause a great deal of harm to Phuket – not only to the local community, but to our image internationally. Our officers acted with restraint last Saturday, as they refused to fight violence with violence,” Gov Chamroen said.

“I do not want to see another blockade or protest on this island. If you are unable to get justice through local officials or even the Damrongdhama Center, come talk to me – let me bear the burden of your need for justice. Every problem has a solution.”

US complaint leads to raid on Patong pirate shops