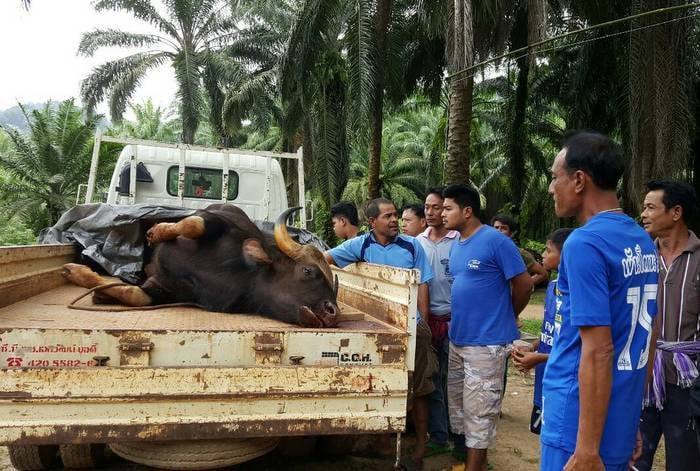 KRABI: Officers are hunting the killer of a much-beloved gaur that was found shot dead in a Krabi palm plantation yesterday.

“Locals explained to us that the gaur, which is a protected species in Thailand, had migrated down from Khao Sok National Park. They said that the bull was very calm and peaceful,” said Meechai Aiyasoon, head of the Khlong Phraya Wildlife Sanctuary Center. “They loved the animal, often doing what they could to take care of him.”

Jao Kai Dam, which had moved to the area last year, was found with nine bullet wounds to his body and a deep gash to his neck.

“The bull was found staying with local herds of cattle sometimes, but people hadn’t seen him for a while. They were very surprised when they stumbled on to his body.”

A complaint was filed to the Plai Phraya Police for the slaying of the protected animal.

Both Plai Phraya Police and officers from the Khlong Phraya Wildlife Sanctuary Center are searching for the killer, confirmed Mr Meechai.