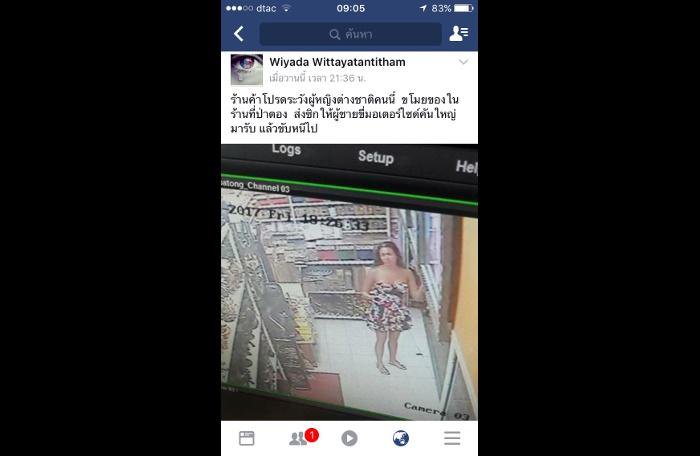 PHUKET: Police are hunting for a foreigner who stole merchandise from a souvenir shop in Patong last week.

CCTV footage of the incident was shared on social media by Facebook user Wiyada Wittayatantithem on Sunday, with a caption that read: “Please beware of this foreign woman. She stole things from a store in Patong and then signaled to a foreign man who picked her up on a big bike, after which the pair escaped.”

Santi Pruekprathin, the owner of ‘BJ Souvenir’ said the stolen merchandise was only worth 380 baht and he does not intend to file charges of theft, but wants this to serve as a warning to other businesses and the general public. The video was widely shared on social media.

“The shop is located in front of the Taipan nightclub in Patong. We checked all the CCTV footage and can verify that the woman did, indeed, steal merchandise from the store,” said Maj Korapol Leangboonjinda of Patong Police.

“Even though the owner is not pressing charges, we are investigating the incident and looking for the suspects. Such incidents give a bad reputation to Phuket, especially if foreigners are involved. We hope to apprehend them soon,” Maj Korapol added.

Another incident involving two foreigners, who ‘borrowed’ a motorbike and left it by the roadside, took place last week (story here).

Phuket donates by the truck-load