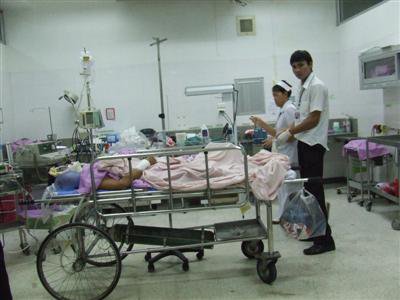 CHALONG, PHUKET: Chalong Police say they are making good progress in their investigation into the attempted murder of businessman Chalermpol Pranweerapaiboon, who was shot in the back of the neck by an assailant at Wat Luangpoo Supha on Maka Bucha Day (February 12).

Despite the claims of progress, Chalong Police Duty Officer Parichat Jaturonphan declined to name any suspects or possible motives, saying that the release of such information to the media could jeopardize the investigation.

Mr Chalermpol’s assailant approached from behind as he was getting into his Toyota Fortuner in the temple parking lot.

The shooter escaped on a motorbike as Mr Chalermpol’s wife, mother-in-law and two daughters screamed in horror.

One of the daughters was able to give a detailed description of the attacker.

The shooting, carried out in broad daylight in full view of many people, shocked the island and made national headlines.

As of yesterday, Mr Chalermpol was still comatose and on a respirator in the intensive care unit at Vachira Phuket Hospital.