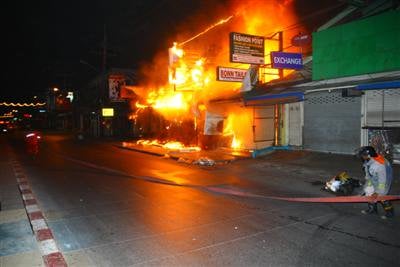 PATONG, PHUKET: For the second time in four days, flames tore through the stalls of Jintana Plaza shopping arcade early on Tuesday morning, causing an estimated four to five million baht’s worth of damage. Police once again suspect arson as cause of the fire, the sixth of its kind since the center was opened.

The fire was reported at around 3 am, roughly the same time as the February 13 conflagration that caused 10 million baht’s worth of damage to a different section of the arcade.

Firefighters took around one hour to put out yesterday’s blaze, which consumed around 100 stalls selling flammable goods such as clothes, shoes and souvenirs.

Police believe the fires could be related to a dispute over the inheritance of center owner Jintana Buringoht’s multi-billion baht estate as she is ill following a stroke.