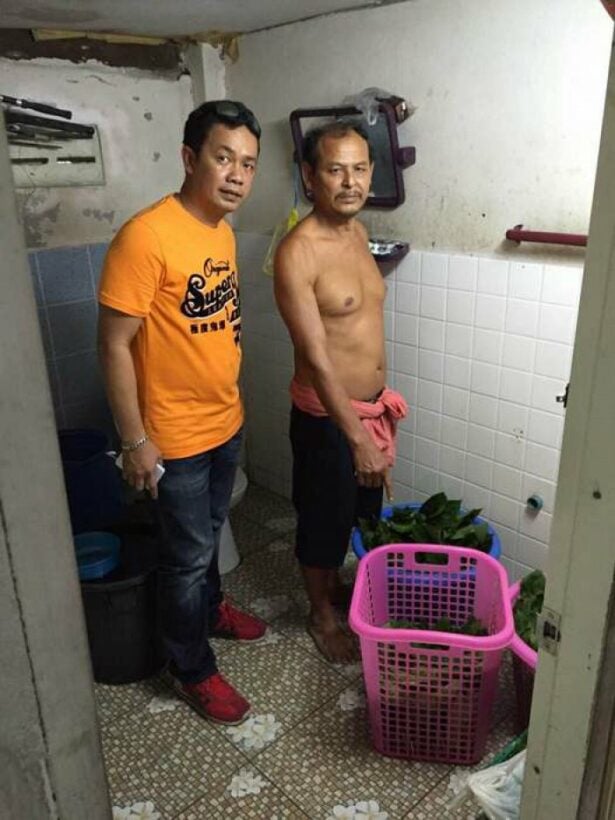 PHUKET: Police arrested two kratom dealers and one user yesterday, following a tip-off that netted more than 14 kilograms of kratom leaves and a list naming more than 100 kratom customers.

Lt Col Sutthichai Thianpho of the Patong Police led the raid that took detectives to the house of a suspected dealer in Soi Phra Barami 9.

“On arriving in the area, we found the suspect, Prasert Somkong, 60, relaxing in a bamboo pavilion near his house. We searched him and found some kratom powder in his possession,” said Col Sutthichai.

“The suspect then took us to his residence, where we found another 14 kilograms of kratom leaves and 35 bags [8 grams per bag] of kratom powder.”

Detectives discovered a list containing the names of more than 100 of Mr Prasert’s regular customers.

“Mr Prasert will be charged with possession of a Category 5 drug with intent to sell.”

Following the bust, police learned about another kratom dealer who was operating out of a mom-and-pop store in Phra Barami Road.

“We raided the store and found its owner, 25-year-old Kritsana Ngernkaew, in possession of seven bunches of kratom leaves [about 105 leaves] and 24 bottles of cough syrup, which she was selling out of the store,” explained Col Sutthichai.

Police also had a bit of unexpected luck when one of Ms Kritsana’s customers turned up at the store to buy some kratom while the raid was taking place.

“We allowed Ms Kritsana to do her business and sell three bunches of kratom leaves to Veerayuth Buarattanakarn, 28, who arrived at the store to by the drug,” said Col Sutthichai.

“Mr Veerayuth was then arrested and charged with buying a category 5 drug. Ms Kritsana will be charged with the more serious offense of intent to sell.”

All three suspects have been transferred to Patong Police Station, where they will be held pending court appearances and further investigation.