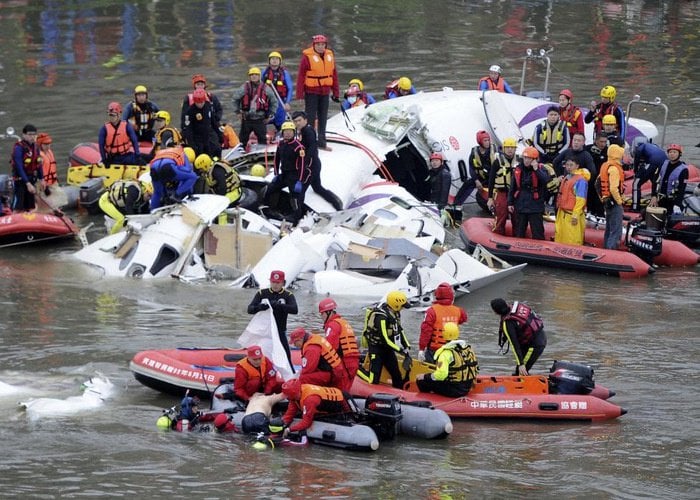 PHUKET: A TransAsia Airways (6702.TW) plane with 58 passengers and crew on board careened into a river shortly after taking off from a downtown Taipei airport on Wednesday, killing 31 people and leaving 12 missing, officials said.

Fifteen people survived the crash after the plane lurched between buildings, clipped a taxi and an overpass with its port-side wing and crashed upside down in the shallow water.

e motorway soon after the turboprop ATR 72-600 aircraft took off in apparently clear weather on a domestic flight for the island of Kinmen.

“I’ve never seen anything like this,” a volunteer rescuer surnamed Chen said of the most recent in a series of disasters to hit Asian carriers in the past 12 months.

Television footage showed survivors wearing life jackets wading and swimming clear of wreckage. Others, including a young child, were taken to shore in inflatable boats.

Emergency rescue officials crowded around the partially submerged fuselage of flight GE235, lying on its side in the river, trying to help those on board.

The plane missed apartment buildings by meters, though it was not clear if that was luck or whether the pilot was aiming for the river. Footage showed a van skidding to a halt on the damaged overpass after barely missing the plane’s wing, with small pieces of the aircraft scattered along the road.

The chief executive of TransAsia, Peter Chen, bowed deeply at a televised news conference as he apologized to passengers and crew. TransAsia’s shares closed down 6.9 percent in heavy trade, its biggest percentage decline since late 2011.

The last communication from one of the aircraft’s pilots was “Mayday Mayday engine flameout,” according to an air traffic control recording on liveatc.net.

A flameout occurs when the fuel supply to the engine is interrupted or when there is faulty combustion, resulting in an engine failure. Twin-engined aircraft, however, are usually able to keep flying even when one engine has failed.

The head of Taiwan’s civil aviation authority, Lin Tyh-ming, said the aircraft last underwent maintenance on Jan. 26. The pilot had 4,916 flying hours under his belt and the co-pilot had 6,922 hours, he said.

A statement from China’s Taiwan Affairs Office said 31 of those on board were tourists from the southeastern city of Xiamen, which lies close to Taiwan’s Kinmen island.

The crash is the latest in a string of mishaps to hit Asian carriers in the past 12 months. An AirAsia (AIRA.KL) jet bound for Singapore crashed soon after taking off from the Indonesian city of Surabaya on Dec. 28, killing all 162 people on board.

The disappearance of a Malaysia Airlines MASM.KL jet last March, and the downing of a sister plane over Ukraine four months later with a combined loss of 537 lives, have dominated a United Nations safety conference this week.

TransAsia is Taiwan’s third-largest carrier. One of its ATR 72-500 planes crashed while trying to land at Penghu Island last July, killing 48 of the 58 passengers and crew on board.

Taiwan has had a poor aviation safety record in recent years, including the disintegration of a China Airlines (2610.TW) 747 on a flight from Taipei to Hong Kong in 2002, killing 225.

The almost brand-new plane involved in Wednesday’s mishap was among the first of the ATR 72-600s, the latest variant of the turboprop aircraft, that TransAsia received in 2014 as part of an order of eight aircraft two years earlier.

The 72-seat aircraft are mainly used to connect the capital, Taipei, with smaller cities and islands.

ATR is a joint venture between Airbus (AIR.PA) and Alenia Aermacchi, a subsidiary of Italy’s Finmeccanica (SIFI.MI).

France, where the aircraft was designed and built, said it was sending investigators to help with Taiwan’s accident probe