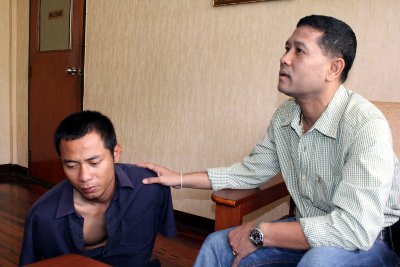 PHUKET: A suspect arrested last night has confessed to strangling Phuket teenager Sunisa “Som” Saiyoy, 17, in her Chalong home on Tuesday, but denies charges that he raped her.

The suspect, 28-year-old Kittikhun Wonghajak, was arrested by the Phuket Provincial Police investigation team early this morning and was presented to the press briefly at 10am at provincial police headquarters.

A press conference is scheduled for this afternoon.

Kittikhun confessed to breaking and entering the home of Ms Sunisa and killing her, but has thus far denied charges that he attempted to rape the teenager.

“After the crime, I ordered both the Phuket Provincial Police investigation unit, as well Chalong Police, to investigate and arrest the suspect. We focused on [suspected or known] thieves in Phuket, as well as local residents known to have disappeared after the murder,” said Maj Gen Chonasit.

“Last night, the suspect was arrested in Chalong by our investigation team. The suspect is a known criminal who has burglarized homes in many different areas.”

Meanwhile, family and friends began bathing rites for the late Sunisa at Wat Lakthiwanaram (Wat Tai) in Chalong yesterday. The cremation is scheduled for Saturday.

Phuket Sports: Lance gets a shot in the arm with extended deadline