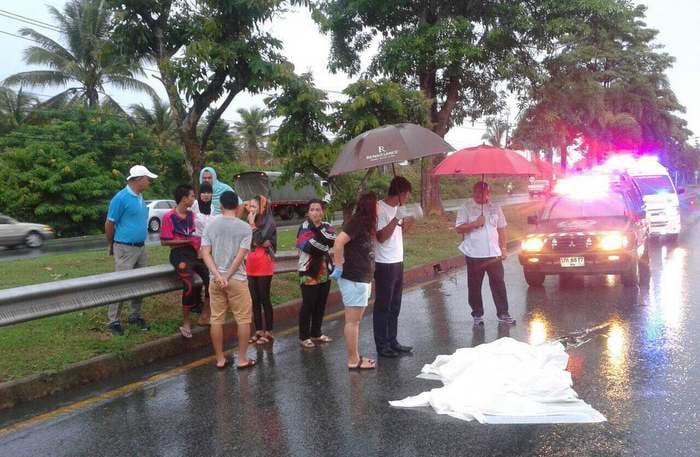 PHUKET: Police arrested the driver of an 18-wheeled truck that hit and dragged a 12-year-old girl to death just south of the Tah Chat Chai checkpoint yesterday morning (story here).

The truck allegedly struck the motorbike that the girl and her mother were riding, causing minimal damage, but knocking the mother-daughter pair to the concrete.

Nong Latthaporn fell under the wheels and was dragged for almost a kilometer, Maj Santi Prakobpran of the Tah Chat Chai Police explained.

The driver was arrested hours after the accident, as police followed the truck via CCTV footage to its resting place near Wat Luang Pu Supha in Chalong

The 22-year-old, Sittipong Sinphae, was found with the truck and arrested for reckless driving causing death and fleeing the scene of an accident, Maj Santi told the Phuket Gazette today.

“The driver told us that he didn’t know anything about the accident,” Maj Santi said. “He said that it was raining hard at the time, and though he did hear something, he thought that it was nothing.”

Nonetheless, marks on the side of the truck revealed that it had been in an accident.

“Mr Sittipong has already informed his insurance company and will negotiate with the girl’s family when they are ready to talk,” Maj Santi said. “We will of course continue with the necessary legal steps with regards to Mr Sittipong.”